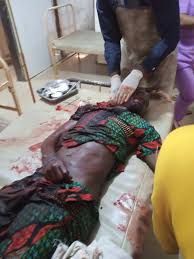 A father of two has lost his life over argument on N100 okada fare in Alagbado area of Lagos, thegazellenews.com can exclusively report.
The man, popularly called Baba Rokiba in the AIT area of the state, was stabbed to death by the Okada rider whose Okada he boarded on his way to work.
According to eye witness account who spoke on condition of anonymity, said the incident took place on Wednesday, 2 November, 2022.
Baba Rokiba, according to reports, had boarded the Okada on a street very close to his residence, on his way to a job he was invited to on AIT Road in Alagbado area of the state.
However, the Okada rider suddenly decided that he was no longer interested in the trip, hence he asked his passenger to pay him N100 for the distance he had covered.
Baba Rokiba was reported to have bluntly refused saying that the Okada should either take him to the agreed destination, collect the full fare or forfeit the fare on half way.
Thegazellenews.com learnt further that the insistence of Baba Rokiba not to pay and the Okada rider to collect money for the distance covered already, developed into argument and snowballed into a physical brawl.
The Okada rider seeing himself at a disadvantaged physically figure against the imposing six footer Baba Rokiba, sought ‘help’ somewhere else.
He got hold of a broken bottle nearby and stabbed Baba Rokiba on the neck and the man died few minutes later at a nearby hospital he was rushed to.
The Okada rider was arrested and handed over to the police at AIT area and thegazellenews.com learnt that he has been transfered to the state Criminal Investigation Department (SCID) at Panti, Yaba.