By The Gazelle NewsNovember 29, 2022No Comments5 Mins Read 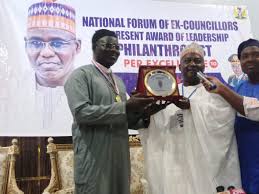 Share
Facebook Twitter LinkedIn Pinterest Email
By: James Bwala
With a vision of aligning themselves with the former Army Chief, Lt. General Yusuf Tukur Buratai, in strengthening and solidifying his foot on the political ground, the National Forum of former councilors from Nigeria’s 774 local government areas, representing over 250,000 members, has added colors to numerous individuals and organizations. The forum has presented the former Army Chief with a Prestigious Award, identifying him as a Philanthropist per Excellence for the calendar year 2022.
The National Councilor’s Forum, under the leadership of its President, Amb. Hon. Auwal Kassim Hassan, informed the former Army Chief that they are there to demonstrate their loyalty to him and to commit themselves to whatever course he decides to take in politics with the remainder of his strength reserved to serve Nigerians more directly in plain clothes.
“As we all know, General Yusuf Tukur Buratai is well-liked in Nigeria. Our choice to support him on this political journey is zealous and responsible. Buratai is a man who sacrifices everything for the sake of the rest of us and has always operated in the best interests of the populace. We are bringing to light the unsung heroes who contributed to the total liberation of our people. He had served the people’s strong desire to make sure that they were formed on the appropriate character as a young officer.
“He defended the integrity of the Nigerian state by standing against an undetermined number of forces as leader of the Nigerian Army. He is standing alongside President Muhammadu Buhari as a politician to support distinctive leadership. The gathering today for a brief ceremony and award presented for his philanthropic positions as a man the Nigerian state is pleased with was influenced by all these contributions, which are too numerous to name.” Auwal said.
According to the forum, some people’s life accomplishments serve as a multifaceted blessing to a lot of people in society, due of their admirable achievements that had a good impact on people’s lives, both residents and society stood to win notoriety, support, and special assistance.
“While some leaders act as if tomorrow will never come, there are still a select few people whose contributions to the sociocultural, economic, and political environment continue to be of the highest caliber. Lt. General Tukur Yusuf Buratai, who presided as the Federal Republic of Nigeria’s Chief of Army Staff from 2015 to 2021, is one of such figures in Nigeria today.
“Following his accomplishments, President Muhammad Buhari gave him a new job by designating him as the Nigerian Ambassador to the Republic of Benin. He makes his way back home today, where he believes it is important to provide closure to the populace, contribute to the political environment, and support President Muhammadu Buhari as he works to make history once more for the All-Progressive Congress, APC, in the upcoming general elections.” The forum said.
General Tukur Yusuf Buratai is also sporting a double hat as he celebrates turning 62 while receiving the leadership for philanthropic work award. In fact, Lt. General Turkur Yusuf Buratai’s (rtd) journey from his early years to the pinnacle of his military, diplomatic, and political careers today also announced the former Army Chief as a new member of those in the annals of Nigeria’s history.
Lt. General Yusuf Tukur Buratai was praised by many who knew him for his diligent performance in his various commands, administrative roles, and teaching positions. He was also described by some of them as a man of intellect and character. He is a distinctive officer and a renowned General in military history due to his ability to strategically streamline his operations and be transparent about his goals.
The Vice President of the Forum of Nigeria’s Councillors, Engr. Ismaila Abdulmuminu, announced that in light of the former Army Chief’s accomplishments, the forum’s 774 councillors across Nigeria have sworn their allegiance to him.
“Nobody follows a man who has boring times, and bold ones are never alone. According to numerous soldiers’ accounts that we overheard, General Tukur Yusuf Buratai is the first general in his capacity as Army Chief to have actively participated in battle alongside his troops. This does in fact offer the soldiers the motivation they need to fulfill their end of the contract with the adversary. The local administrations that Boko Haram had influence over were severely criticized as a result of such efforts.” Engineer Ismaila said.
Other former council members, including Glorious Francis from Akwa Ibom and Hon. Engr. Yusuf Kassim from Kaduna, praises the former Army Chief for his can-do attitude and assert that he deserves every honor in addition to being applauded.
“By ensuring that this country’s security is maintained, you have accomplished something very incredible. When many Nigerians began to lose trust in our national security, you made decisions and stuck by them to give Nigerians hope.” Glorious Francis said.
Engineer Yusuf Kassim stated, “All of the local governments in Borno state that the rebels had taken over were freed thanks to your leadership. You essentially modified the command strategy and relocated the command-and-control center to Maiduguri, where you execute both tactics and plans that significantly impact how operations are carried out in northeastern Nigeria.”
A journalist from the NTA, Ismail Musa, contributed his voice during the event and described how he worked with the former Army Chief as a defense correspondent up the hills of Gwoza and in the desert of Malum Fatori at night and during the day to observe the welfare of soldiers on the front lines and to boost their morale for battles. General Buratai eats what the soldiers eat and opted to remain with his soldiers in the frontline to experience what they are experiencing as the fight rages,” he added.
General Buratai referred to journalism as a brave and honorable profession while dedicating his prize to veteran journalists who served beside him on the front lines.