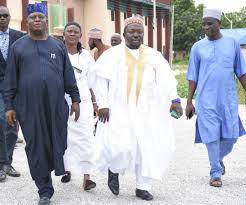 Universal Basic Education Commission (UBEC) on Thursday, 4 August, 2022 said it had a very bad experience with Kwara State in the past over utilisation of matching grants that were meant for development of basic education.

The Commission added however that the situation changed with the coming of Governor AbdulRahman AbdulRazaq whose administration the body commended for exemplary use of the funds so far accessed for school infrastructures.

“We can see value for money here. The funds are well applied. The outcomes are great. This is what we will actually encourage other states to do. Kwara State is doing very well. I have seen things by myself and I can give kudos to the chairman and his team,” Deputy Executive Secretary (Services) of UBEC Dr Isiaka Kolawole told reporters in Ilorin, the state capital, shortly after inspecting some of the newly constructed SUBEB schools and UBEC Model Smart School in Ilorin.

Asked to comment on what the state had missed in the past, Kolawole said: “We know what we went through in managing some states but Kwara State (today) is not one of those states giving us headache except what we had gone through in the hands of Kwara State in the years back. Under this dispensation, the state has been wonderful.

“There is no way you won’t have some states that will be lagging behind in many areas, while some will be in the forefront setting the pace. We have many states doing well too, but definitely some states have performed better whether in the areas of fund utilisation and in accessing the funds.”

Kolawole urged other states of the country to emulate Kwara’s latest investments in the education sector.

The Chairman of the Kwara State Universal Basic Education Board (SUBEB), Prof Raheem Adaramaja, for his part, said the Board is elated with the positive commendation from UBEC which would spur it to do more for the state.

“No commendation comes to us without hardwork. We give glory to God Almighty and we also thank our Governor for his leadership. He gave us every opportunity to triumph and we are working towards that. We are happy for that. We are going to improve on what we are doing,” Adaramaja said.

“Presently, our presence is felt in all the 193 wards in the state. After the construction we started, we are now putting on digital literacy. This will also be extended to various schools in the state.”

Prof. Adaramaja added that the board would from next month begin free distribution of textbooks to pupils on English language, Mathematics, Basic Science and Technology and Social Studies, starting with primary four, five and six.

The government is fixing schools across the state in a bid to make learning environment more conducive and, along with other efforts, improve learning outcomes.