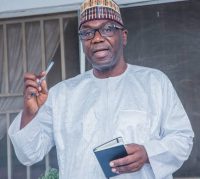 Kwara State Governor AbdulRahman AbdulRazaq has said his administration is determined to right the wrongs of the past, invest in human capital and physical infrastructural development, and improve the living standards of the people.

“We are in government to serve our people. We have made commitments and we will not disappoint. We were here a year ago to campaign for you and you supported us. Let’s do it again this Saturday by voting Adam Ahmed Rufai of the APC during the by-election,” AbdulRazaq said as he wrapped the campaign for the ruling party in Patigi where a House of Assembly by-election is holding this Saturday.

“We come with a solid team headed by myself, the speaker, Deputy Speaker of the House of Assembly, former Speaker Benjamin Isa and other key stakeholders in the party. So, I can assure you that Adam Ahmed Rufai is in good company and will be supported in the Assembly.”

Accompanied by top government officials and party chieftains, AbdulRazaq had on Monday flagged off a marathon campaign tour that touched all the affected 10 wards of Patigi where he pointed out his various developmental strides in the local government and elsewhere in the state since his inauguration last year.

He pledged that the government would give the necessary support to farmers by providing farm implements, chemicals and funds to improve yields to guarantee food security.

“We are aware that some communities do harvest three times in a year. Come with your specific demands on the type of suitable farm implements and we will support you,” he added.

AbdulRazaq said the government was discussing with the Central Bank of Nigeria (CBN) to lend money to those who want fund above N250,000 to support their businesses through the bank’s Anchor Borrowers Scheme.

He added that the Social Investment Programme, which is due for launch anytime soon, would support smallholder farmers, artisans, small business owners, particularly women, and boost people’s purchasing power.

“You all can testify that we are doing things differently. That is one reason we need you to vote Adam Ahmed Rufai who is a member of our party and shares the vision of this administration,” he said.

Speaker of the Kwara State House of Assembly, Salihu Danladi Yakubu urged voters to come en masse on Saturday and elect Ahmed Rufai to guarantee quality and effective representation at the parliament.

#COVID-19: No Clubbing, Carnival & Concerts In Kwara Until..

Breaking: Lagos Extends Work From Home Order For Workers On Levels 1-14 To Feb 26

How Our Campaign Slogan ‘Otoge’ Came About – Kwara Gov; Says Donations By Govs, Ministers Not Delivered To Him