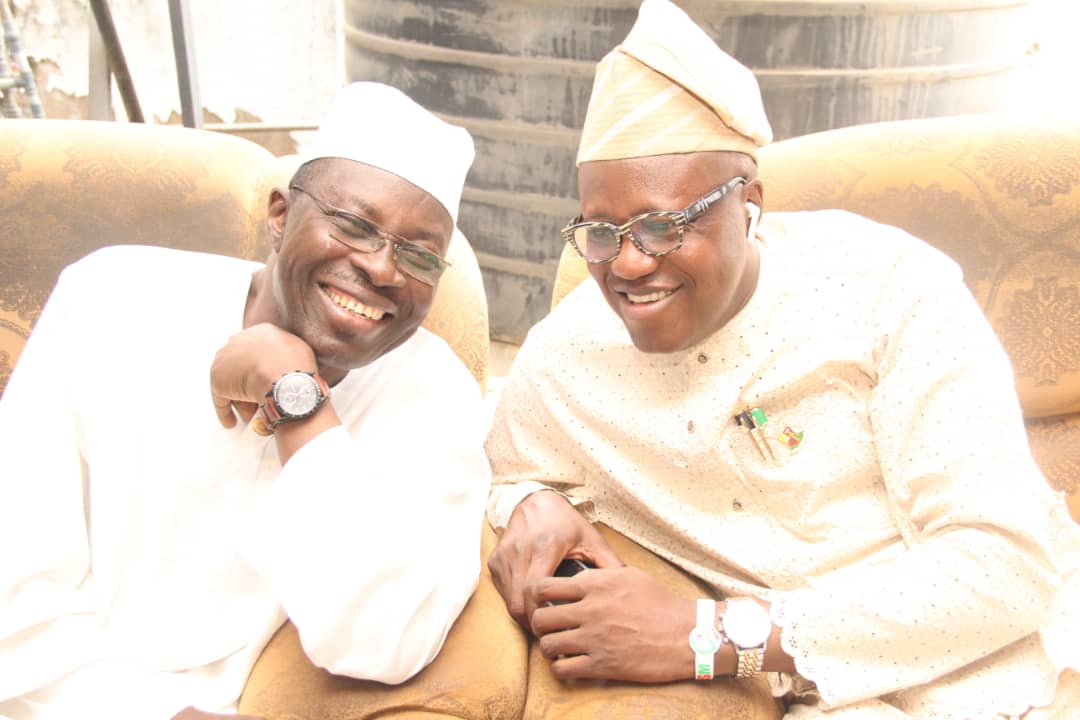 Posted By: The Gazelle NewsIn: Education, NewsNo Comments
Print Email
The Executive Chairman of Oyo State Universal Basic Education Board, Dr. Nureni Adeniran who was also a national delegate to the Peoples’ Democratic Party National convention in Abuja, today, paid a congratulatory visit to the newly elected National Deputy Chairman of the party, Amb. Taofeek Arapaja, at his Ibadan residence.
While congratulating the new Deputy National Chairman, Adeniran, who was accompanied by a full-time member of the Board, Hon. Akeem Oladeji and some political associates, wished him a successful tenure in office, expressing optimism that he would exhibit the true omoluabi ethos, as a genuine Ibadan-man.
According to him, “Your victory at our party’s National convention, indicates clearly the confidence that the entire party delegates repose in the Governor Seyi Makinde leadership. We are optimistic that you will make Oyo State proud and we thank God for your emergence”.
Commending Governor Makinde’s efforts at ensuring Oyo state gets such a plum position in the party and building a stronger party, he prayed God to give him the wherewithal to lead Oyo state and the party right.
While he lauded the Governor for his role in the growth and development of the party, Adeniran also urged the new National Deputy Chairman to play his role as a leader and strengthen the support base for PDP and its organs.
“We are assured that Amb. Taofeek Arapaja will deploy his wealth of experience strengthened by the democratic tenets and principles of our great party, in his new mandate of leading the party as its National Deputy Chairman, South”, he said.
Adeniran added, “We congratulate you and urge you to use this new position to further the advancement of our party and develop our Nation.”
While responding, Amb. Arapaja expressed his profound gratitude to Almighty God and specially thanked Governor Seyi Makinde and all delegates for their support.
He vowed to do everything within his capacity to ensure the party remains stronger than ever, with a view that the party emerges victorious in the 2023 general election.
“There was no victor, there was no vanquish. The contest was a family affair and we all had the same focus to rescue Nigeria from the claws of suppression to which the present government has subjected the nation.
“I admonish all of us to join hands together in this rescue mission we are set to embark on”, he concluded.

BEDC To Improve Power Supply In Igarra, Its Environs