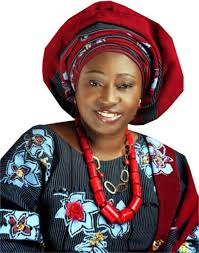 Who Is Afraid Of Erelu Bisi Fayemi?

Posted By: The Gazelle NewsIn: News, OpinionNo Comments
Print Email
-By Obafemi Oluwadare, PhD
Welcome to Ekiti State, the next station of the gubernatorial election train after leaving Anambra State. Political geeks and propagandists have started displaying their wares in anticipation of the take off. The clouds are gathering, lies and half truths are being woven together by masters and mediocres of the act.
Henceforth and until the gubernatorial election is done and dusted in June 2022, the caveat for readers and viewers is for them to take whatever story they read or hear concerning Ekiti through any political platform with a pinch of salt. For as long as the game lasts, barefaced lies, half truths and distortions will not cease from the land.
In some quarters, it is called Leemo, simply interpreted as “haul it at him/her.” It is difficult to see how an opposition would voluntarily give up the opportunity to smear and mud-sling in this season, knowing that except they weaken or damage the reputation of those at the helm, the force will be damn too strong to be confronted. In boxing, it is known as hitting below the belt.
Let’s quickly flash back to 2014 when Dr. Kayode Fayemi was aspiring to get a back-to-back second term, a lot of lies were hauled at him in the bid to weaken his strength. He was accused of running a university somewhere in Ghana with neither a name nor fixed address given to buttress their claim. Fayemi was accused of being arrogant and disconnected from the people. Some of his critics even claimed he was stingy and not given to stomach infrastructure.
Let’s roll the tape forward to now, with Fayemi having served his second term in office and coasting home with great achievements (2018-2022). There is no more talk of any university in Ghana, the governor is no longer disconnected, arrogant or stingy. Rather, his wife, an effervescent personality, is too connected, much that the critics believe she has too much influence on the people of the state, especially the women.
In their warped thinking, the bubbly Erelu Bisi Fayemi is now more politically on ground than her husband and she is taking full advantage of it. One hatchet writer particularly quoted an “inside source” as having revealed to him that “she (First Lady) is nursing a Senatorial ambition to represent Ekiti North Senatorial District in 2023…” Whaoooh!
Perhaps, for the umpteenth time, one should reiterate to the sponsors of those mischievous missives that Erelu Bisi Fayemi is simply in her elements. She is a non-stop do-gooder with a strong character and incessant activism that cannot be taken for granted. Unlike those other women who are mere accessories to power, Bisi Fayemi is a strong complement to her husband’s image. She is a role model to other women and girl-children in Ekiti just like she is to them elsewhere. It is for this that she has won so many personal laurels. She is also at the forefront of fighting against poverty and injustices across the globe.
Shame on those who keep saying Bisi Fayemi is from Ondo State and should not be involved in Ekiti politics. When you need Erelu to defend the cause of women and the girl child, when you need her to bail out people in dire situations and work assiduously to ensure women and the less privileged in the society get the much needed lift or perform any other philanthropic work, Erelu is from Ekiti. But the moment she does not agree with your views, she is from somewhere else. That is wickedness. Thank God that brand of evil politics is alien to Erelu and her husband.
Well, Erelu is unapologetically generous. She is also quite intelligent. But they’re all in her DNA and she has no apology to make. Rather, she has been using the qualities to perform positive functions for her husband on the political stage: She supports his career, campaigns for her husband, offers political advice, carries out assignments on his directives, embraces and promotes policies, serves as his most trusted and closest political ally. In short, she is her husband’s Number One Cheerleader!
Doubters may therefore be right to argue that Erelu Fayemi is not an uninvolved First Lady. Of course that will be too old fashioned of her. Even at that, she will be the last person to persuade her husband to do anything he does not consider right or in the best interest of the State. To her, even if she has an opinion as a political wife, she must subsume it under that of her husband.
Erelu is famous, no doubt, but she is not in competition with her husband. At the very best, she is his pride and does all she could to complement him, yet she remains humble and still, without bragging about any of her achievements. She would rather prefer that her critics take her up along the lines mentioned instead of fabricating falsehood in the name of Leemo. And lest they know not, nothing sticks on this lady of worth, for as long as she toes the path of righteousness. Shame on her traducers who couldn’t brave it to confess that they were simply being grossly unfair to an unusual First Lady.
-Obafemi Oluwadare, PhD