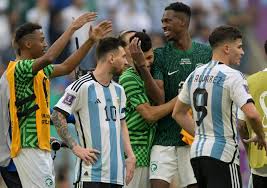 Posted By: The Gazelle NewsIn: News, SportsNo Comments
Print Email
Saudi Arabia stunned Argentina in one of the World Cup’s greatest-ever upsets as tournament came to life.
The South Americans are ranked as one of the favourites to go all the way in Qatar but they were left floored here.
Argentina took the lead through Lionel Messi’s early penalty, which was awarded following a VAR decision.
But two goals in eight minutes just after half-time flipped the contest and Argentina couldn’t come back.
Saleh Al-Shehri nipped in to slide home the equaliser before Salem Al-Dawsari picked out the top corner.
It then took an heroic defensive performance to see them home as they weathered a barrage Argentina attack till the final whistle.
In a match that will be recalled as long as the World Cup is played, they came from behind against all the odds to beat one of the tournament favourites as Lionel Messi’s final campaign began in disastrous fashion.
Argentina had been by far the better side before half-time, taking the lead thanks to Lionel Messi’s early penalty awarded thanks to VAR.
The shock result was far from what Lionel Messi and Argentina expected in the first game of his farewell World Cup
The Saudi Arabian players could scarcely believe what had happened after the final whistle blew on an historic victory
Saleh Al-Shehri was able to get ahead of Cristian Romero inside the Argentina box to slide home Saudi Arabia’s equaliser
Saudi Arabia, which is located just next door to Qatar, were well supported with thousands of fans travelling to the match.
The Argentinians had three other goals ruled out for offside calls picked up by the automated system before half-time as Saudi’s high defensive line just about held.
But then they were left lying flat on the floor with two goals in the opening eight minutes of the second period.
Saleh Al-Shehri drew them level stole a yard on Cristian Romero to fire across goal and equalise.
Then, Salem Al-Dawsari worked space to shoot inside the box to pick out the top corner as Argentina’s defence was breached again.
A heroic defensive performance then saw Saudi Arabia to one of the World Cup’s most famous results.
Source: