By The Gazelle NewsDecember 8, 2022No Comments1 Min Read 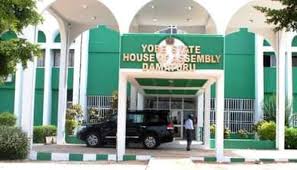 Share
Facebook Twitter LinkedIn Pinterest Email
The Yobe state House of Assembly, said it has suspended the screening of Mr. Sani Kaitafi, as chairman of the state Internal Revenue Board to carry out some oversight functions in the board.
Alh. Ahmed Lawan Mirwa, Speaker of the Assembly stated this on Wednesday, 7 December, 2022 in a message to the Governor.
The House advised the state government to halt further actions and maintain the status quo pending the conclusion of the oversight function and approval of the appointment.
“The Assembly wants to be on the same page with the Executive arm before the commencement of new leadership of the board,” he said.
Alh. Mirwa said the oversight function is intended to strengthen revenue generation and block all leakages.
He assured the readiness of the assembly to work with the executive arm of government for the development of the state.