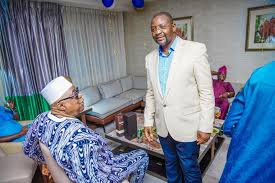 The Minister of Youth and Sports Development, Mr Sunday Dare has expressed deep shock and sadness over the death of former Oyo State Governor, Chief Adebayo Alao- Akala, describing it as a huge loss to Ogbomoso, Oyo State and Nigeria.

According to a statement by the Minister, “I received the news of the death of my elder brother, astute political stateman and former Governor of Oyo State, Chief Christopher Adebayo Alao-Akala with a huge sense of loss, shock and pain. His death not only came suddenly, but was quite devastating. He was like a big brother to me, so his death has robbed me of a dear one who was so passionate about the development of Ogbomoso, Oyo State and Nigeria at large.”

The Minister further stated that, “His death is a huge loss not only to the family, but Ogbomoso, Oyo state, the APC and Nigeria at large. His death has created a huge vacuum in our political space. Coming at a time when his political sagacity and clout was most needed makes it such a monumental loss. May God console his family, his political associates and the people of Oyo state on the demise of this great personality.

What Next After Two Weeks Extension For PVC Registration By INEC?