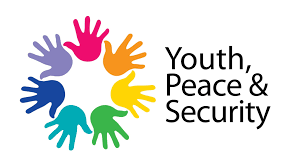 Posted By: The Gazelle NewsIn: News, PoliticsNo Comments
Print Email
Nigeria has taken a major step towards producing a National Action Plan (NAP) on Youth, Peace and Security as youth across the country on Friday affirmed to the draft document in Abuja.
Representatives of youth from all over the country gathered at the Auditorium of the Institute for Peace and Conflict Resolution to affirm to the 55-page document: “Nigerian National Action Plan on Youth, Peace and Security, an adoption of UNSCR 2250.
Speaking at the occasion, the Minister of Youth and Sports Development, Sunday Dare said the occasion is part of steps to ensure that the instrument of the United Nations Security Council Resolution 2250 on Yotuh, Peace and Security which was unanimously adopted on the 9th December, 2015 by the United Nations Security Council which recognizes the vital and significant roles young people play in engendering peace and security is adopted in Nigeria.
Dare who was represented by the Director, Network and Social Mobilization, at the Ministry of Youth and Sport Development, Mrs. Amina Daura, said: “It is therefore imperative that youth inclusiveness in peace and security programming is directly proportional to meaningful development of a country and this has equally led to the adoption of Resolutions 2419 and 2535 as further proof of roles of youth in conflict prevention and peace
building.”
The Minister said the need to domesticate the Resolution necessitated the formation of a Global Coalition on Youth, Peace and Security, adding that: “It is interesting to note that  our journey actually started with the launch of the UNSCR 2250 in October, 2016 where a Working Group to see to the implementation was also formed.”
He noted that: “In following through with the United Nations Secretary General’s commissioning of a Steering Committee to work on the Global Study on Youth and Peace-building, which was to inform the world on the state of Youth, Peace and Security, the Global Study Report and the Leadership Role of Young People in Preventing Violent Extremism in the Lake Chad Basin were launched in March 2019 in Abuja. It was at this launch that participants called for a Multi-Stakeholders Conference to further identify issues and way forward for Nigeria.”
He said the cardinal objective of the UNSCR 2250 is to domesticate and implement with a view to building lasting peace and security in Nigeria with our young women and men taking the lead.
He promised that: “Following from this affirmation meeting, my Director, NSM Department and key stakeholders will make official submission of the draft NAP-YPS to my office; thereafter, I will make a formal transmission of the document to the Federal Executive Council for approval and then the official launch of the document for implementation will take place at a date that will be communicated to stakeholders.”
Also speaking at the occasion, the Director General, Institute for Peace and Conflict Resolution (IPCR), Dr. Bakut Bakut  said the process so far has been herculean and painstaking, involving comparison of notes with countries like Finland and enlarging the working group from time to time to meet up with specifics and details.