By The Gazelle NewsDecember 25, 2022No Comments2 Mins Read 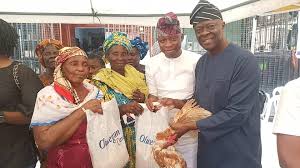 Share
Facebook Twitter LinkedIn Pinterest Email
By Fashina Shakiru
A member of the All Progressives Congress (APC) in Lagos State, Hon Olusegun Idowu has distributed Christmas gifts to over 1,500 households.
Speaking with journalists on Friday, 23 December, 2022, Idowu said,  ”Olusegun Cares Foundation is an initiative that has spanned over 16 years catering for the less privileged and putting smiles on the faces of the community for those who do not have enough to celebrate the yuletide”.
According to him, what brought about this gesture was an elderly man who came to meet him 16 years ago.
“The man said, ‘My son give me money to buy Christmas chicken for this season’. And I felt that there were so many families like that without such access to him.
“Consequently, I made a decision to provide for the people irrespective of their religious beliefs, political affiliations, tribes and ethnicity. Although I started with 50 packages of foodstuffs and chicken, it has increased tremendously to 1500 packages.
“The passion for this is also traceable to the scripture, Proverbs 19 verse 17 which says ‘when you give to the poor, you lend to God  and God owes no man’. So as we do this, we made those who don’t have much to be happy and we do it every year.
“As the 2023 election approaches, we implore Nigerians to vote APC at all levels,” Idowu said.
Commenting, Hon Olawale Edun, a chieftain of the party and close ally of Asiwaju Bola Tinubu, commended the initiative of Idowu describing his gesture as part of democracy, that is, putting smiles on the faces of the people at all times especially during the Yuletide period.
“Mr Olusegun Idowu is doing well, and he has done well for the past 16 years, reaching out to the less privileged.
“This is part of democratic mobilization. He is propagating the name of party, he is doing this to promote the party’s candidates right from our Presidential Candidate, Asiwaju Bola Ahmed Tinubu, to all APC candidates by ensuring victory come 2023 election.
“In every opportunity, APC people are doing better.  Asiwaju Bola Ahmed Tinubu, as president of Nigeria, will make things better. He did it in Lagos, and he can do it at the federal level. He will bring smiles to the faces of the masses of the people,” Edun said.