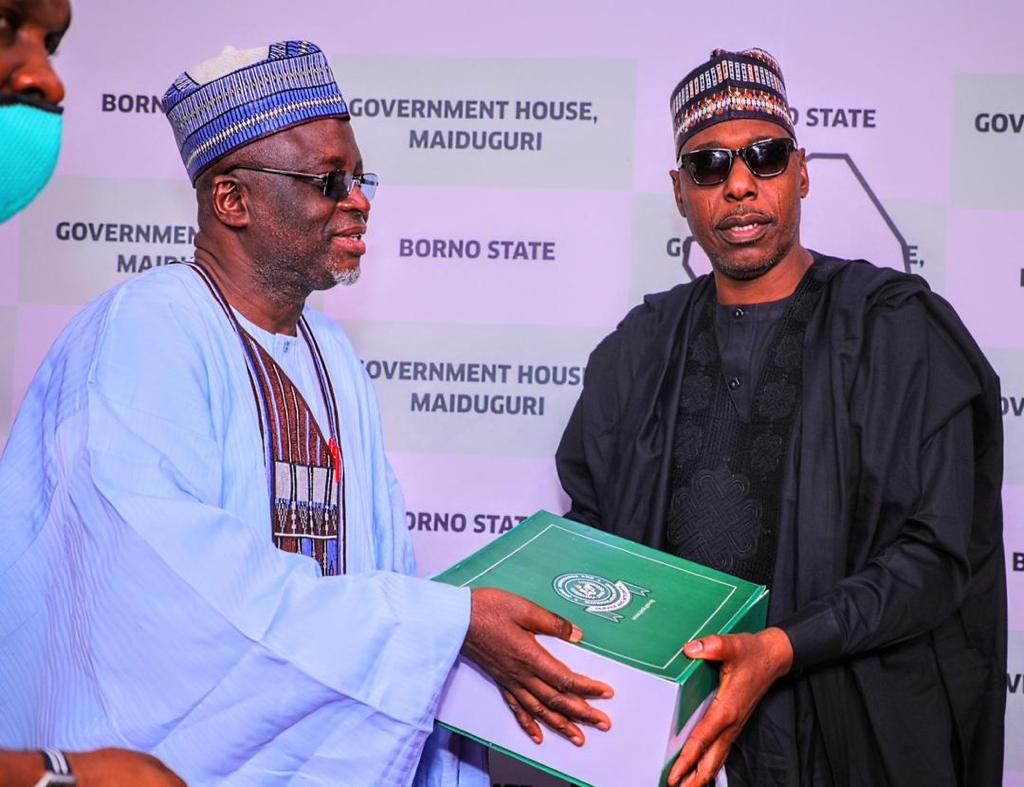 Posted By: The Gazelle NewsIn: NewsNo Comments
Print Email
Borno State Governor, Babagana Umara Zulum has directed the allocation of land for the Joint Admission and Matriculation Board (JAMB’s) computer-based test center in Maiduguri.
Zulum gave the directive on Thursday, 2 December, 2021 when he received the Registrar of JAMB, Professor Is-haq Oloyede at the Council Chamber of the Government House.
The Governor also directed the Borno State Geographic Information Service (BOGIS) to issue a Certificate of Occupancy for the
property, which currently houses the Board’s Zonal and State office in Maiduguri.
Zulum further directed the State’s Ministry of Higher Education, Science, Technology and Innovation to sponsor all interested Borno indigenes that are willing to study in tertiary institutions in other parts of the country.
The Governor said, this measure is to fill up the gaps in the merit and catchment area quotas in many Federal Government tertiary institutions across the country meant for Borno people.
… Nigerians all over applaud Zulum, Registrar says
In another development, the Registrar of Joint Admission and Matriculation Board, Professor Is-haq Oloyede has lauded the Borno State Governor, Babagana Umara Zulum for raising the bar of accountable governance that make Borno a reference point in Nigeria.
“I feel very happy seeing you because, you are a pride to everything you represent. I have reasons to be very proud of you. I feel proud to be Nigerian because you are Nigerian. If leadership is service, from what we see of you, what we hear of you, most of them are well intended. When you are not there, the reality is being said about you.” Prof. Is-haq said.
He added, “Everywhere you go, even when someone has reason to hate you, he will still acknowledge the fact that you are not supposed to be hated by anybody who is sane.”
Commenting on the closure of the IDPs camps in Maiduguri and Jere, the JAMB Registrar commended Governor Zulum for the bold steps in returning people back to their ancestral homes, which he said signals the return of peace to some parts of the State.
“The initiative to close down all the Internally Displaced Persons (IDP) camps in Maiduguri will pave way for the return of all the displaced persons to their ancestral homes. This is quite commendable as it signals a return to normalcy. Some NGOs with no clear objectives and mission in Borno State will now have to go back to the drawing board. The era of opportunistic behavior and mischief by some of these NGOs is coming to an end. I am of the view that beneficiaries of conflict are as committed to its prolongation as its initiators.” Prof. Is-haq said.
The JAMB Registrar also hailed the Governor’s grant made available to encourage research on renal failure and kidney diseases, and the provision of free dialysis service to patients.