Zulum Condemns Violent Clash Over Demolition Of Church In Maiduguri

By The Gazelle NewsAugust 6, 2021No Comments3 Mins Read 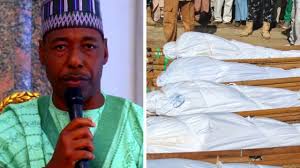 Governor Babagana Umara Zulum has condemned violent clash over demolition of a church and ordered the police to investigate the incident.

At least one person was killed while several others injured after a demolition team of the  Borno Geographic Information Service – (BOGIS) opened fire at armless civilians during a demolition exercise at  Ekklesiyar Yan’uwa Nigeria (EYN), Church in Maduganari area in the capital of Maiduguri.

The incident PRNigeria gathered occured when some angry youths confronted the team headed by Mr Adam Bukar-Bababe, the BOGIS Executive Secretary, after they started demolishing the church structure without notice.

The protest was triggered after a driver of an escalator started destroying the structure of the church including the properties inside which includes; Chairs, board,  fridges, televisions, public address system and other properties.

It is alleged that a Civilian Joint Task Force Member in the demolition team opened fire at the crowd to dispersed them which resulted in the killing of young man identified as Ezekiel Bitrus, a 29 year-old  while five others were severely  injured as they attempted to fled  for their safety.

The reckless shooting, however,  provoked angry youths within the communities  who went on rampage to convey their displeasure over the killing by attacking the team.

The BOGIS Executive Secretary, narrowly escaped being lynched by the  angry youths after he was whisked away by security personnels, while other members of his team took to their hills after some youths gave them a chase from the spot of the incident.

The sources said that the shooter also escaped while other members of the Civilian Joint Task Force  removed  their uniforms and fled the scene for the fear of being lynched.

However, four vehicles belonging to a humanitarian organisation were vandalised by the youths.

It took intervention from the personnel’s from the Borno Police Command, Garison Commander Operation Hadin Kai, a team from the Christian Association of Nigeria(CAN), to bring the situation under control.

Governor Zulum.condemned in strong terms, the firing of gun shots by a member of security task force as well as some persons who hurled stones at the task force during an encounter on Thursday. One person died and five persons are currently hospitalized.

Zulum’s spokesman Isa Gusau, said the Governor commiserates with families of the person who died and those injured.

The Governor also called the chairman of the Christian Association of Nigeria, CAN in Borno State, Bishop Mohammed Naga and spoke with him to commiserate with the Christian community and leadership and family of the EYN church in Borno.

Zulum also invited the CAN leadership for meeting l. He also directed the deputy governor, Umar Kadafur to visit the hospital where five injured persons are receiving treatment, to empathize with them and also takeover the cost of their treatment.