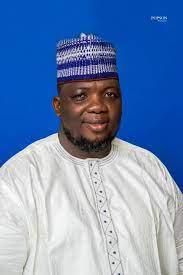 Hon Hakeem Abiodun Muniru
Share
Facebook Twitter LinkedIn Pinterest Email
The political landscape of Isolo was in ecstatic mood on Tuesday 25th May 2021 as Unity Forum’s chairmanship candidate, Hon Hakeem Abiodun Muniru took his message of hope to Ajao Estate, Ilasamaja and Alagbeji wards.
With a mammoth crowd of party faithfuls with orange caps and other paraphernalia, it was obvious a new sheriff has come to town.
The intention was to visit the wards in Isolo LCDA and sensitize the party faithfuls about his ambition but since it can’t be described a visitation, is it a rally? No, It was a carnival of some sort.
The train with a long convoy of over 50 cars and buses moved from the council secretariat to Ajao Estate, Ilasamaja and Alagbeji wards.
At Ajao Estate, the Ajjatta Hall on Murtala Muhammed Airport Road was filled to capacity with party members.
The aspirant was received by party leaders and elders who were joyfully overwhelmed with crowd. Among the leaders in attendance were first Executive Chairman of Oshodi/Isolo Local Government, Chief Martins Adegboyega, former MHR, Hon Jaiyeola Ajjatta, Elder Makinde, Elder Oloyede, leader of Igbo in APC, Barr. Leo Ikeagwu, and Arewa community leaders.
The chairmanship aspirant informed his audience about his intention to become the chairman of Isolo LCDA, adding that his program is to renew hope, assured progress and bring development to the doorsteps of residents of the council area even as he promised to run an open door administration which will cater for the youths, women and the generality of the people.
The former House of Representatives member assured that he can’t be found wanting in terms of educational qualification, exposure, training and exquisite experience in administration.
He stated that he has perfected plans to give to each ward according to their needs.
Hon. Akeem appealed to members of the party to come out en masse on Saturday May 29, to vote in the primaries for him and councillorship aspirants in his fold at different wards.
He re-emphasized that the position of the party GAC was for the party to use democratic means of picking candidate for election which was affirmed by the National Leader of our party Asiwaju Bola Tinubu who said he does not have any preferred candidate.
Hon. Muniru delivered same message of hope in Ilasamaja and Alagbeji wards where he was also received by a mammoth crowd.