BREAKING NEWS
Home News From Hope 93 To Hope 23; From Abiola To Tinubu 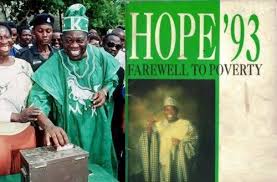 Posted By: The Gazelle NewsIn: News, PoliticsNo Comments
Print Email
By Abdullahi Dan’azumi Golkos
When Are Ona Kakanfo Abiola became the Presidential Candidate of the  Social Democratic Party (SDP) in 1992, there was neither shock nor surprise. For he was already a household name.
He was an established international Businessman,  Publisher, Pillar of Sports, a Philanthropist whose impact was felt in all nooks and crannies of the country. There was no State where a community did not benefit from his largess. His generosity knew no bounds and Nigeria was his constituency . This was beside his membership of the defunct National Party of Nigeria which he quit in 1982.
When he therefore offered to serve, Nigerians responded accordingly with a pan-Nigerian mandate in an election considered the most free and fair in the country’s history.  Unfortunately the election was annulled for a reason that history is yet to unravel.
Asiwaju (Jagaban) Ahmad Bola Tinubu was an elected  Senator at that time and went to become the Chairman of the Senate Appropriations Committee.
With the annulment of the June 12 election,  he became a frontline member of the National Democratic Coalition (NADECO) based in the Southwest dedicated to  restoring that mandate.
He became the financier of the movement. He resisted co-option and appeasement.  He preffered to continue the battle in exile than to betray the course of Democracy. In his struggle for Democracy,  a new standard was set in which he gave his all for the course of the people.
With return to Democracy in 1999, he was elected the Governor of Lagos state. Desirous of providing the best for Lagosians, he sourced for the best in terms human resources. Merit was the basis of consideration rather than anything. Within a short period, despite confronting financial allocation challenges from the Federal Government, the State became self reliant.  It became the point of reference in Financial generation and Management.
Buoyed by his success in Lagos, he was obsessed by the desire to replicate the same  for the country. He pulled out of the Alliance For Democracy (AD) on whose platform he was elected to form the Action Congress(AC).
In his efforts to further entrench democracy in the country, he started consultations with aim of rallying Progressives together to bring out the best.
Alliances were formed, sacrifices were made and concessions were granted without any other consideration but for the progress of a greater Nigeria.
The efforts did not go unnoticed. By 2015, he was already a colossus with an intimidating Democratic profile, the likes of which is hard to find both internally and externally. He has become a referral point in Nigeria’s Politics.
The desire for his experience and leadership have already become the source of consultations among different people and groups.
The Tinubu Door-to-Door Ambassadors (TD-2 TA 2023) was a forerunner of such groups. It predated the expression of Jagaban to contest for the Presidency. It was indeed formed to compel him to contest if necessary knowing fully well that at this stage of the Nations development, only the best can do. And assuming best exists in Politics, then there is none but him.
As the Tinubu Door-to-Door Ambassadors believed in him before his declaration, so shall it be with him to the end until that day in 2023 when we shall be the Eagle Square to witness his swearing in In Sha Allah.
Just as Jagaban committed his all for the course of Democracy , so shall the Door to Door Ambassadors commit all to his victory. It shall mobilise, campaign from door to door and will leave no stone unturned to ensure Jagaba’s victory.
See you at Eagle Square
Abdullah Dan’azumi Golkos, is the National Publicity Secretary, Tinubu Door-2-Door Ambassadors (TD-DA) 2023

Tunde Odesola on Monday: Shameless Soldiers Of The Nigerian Army