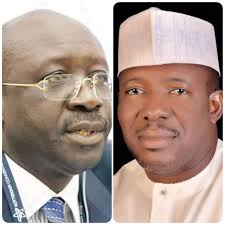 Posted By: The Gazelle NewsIn: News, PoliticsNo Comments
Print Email
A chieftain of the People’s Democratic Party (PDP) in Kaduna State, Hon Ashafa Waziri, has hailed the emergence of former Senate
President, Iyorchia Ayu, as the consensus candidate for the PDP National Chairmanship position, saying it was the “best decision
ever.”
Ashafa Waziri, who was a chairmanship aspirant during the PDP Congress in Kaduna State last year, said he was convinced that as National Chairman, Iyorchia Ayu, will unite the party and make it more formidable.
He said he was glad that PDP was being returned to its founding fathers, noting that “Fact is, Iyorchia Ayu was a member of the G-34 which later became PDP and at this critical time, there is no better, option for the party than to go back to its root.”
Waziri described the incoming National Chairman as a man of integrity, who will run the affairs of the party with fairness and equity.
He said; “Senator Iyorchia Ayu is one politician that I respect so much. He is a man whose word is his bond. He won’t tell you no when he
should tell you yes and most importantly, he won’t allow any of the party members to be cheated.
“With him as the Chairman, all members of the party, particularly the major stakeholders can be sure of a level playing ground because the
Iyorchia Ayu that I know will not condone injustice.”
The former chairmanship aspirant called on party leaders across the country to support the former Senate President when he assumes office, saying; “there is no better time to salvage the PDP than this period that Nigerians are openly desirous of a change for the better.”

Ize-Iyamu To Obaseki: Return to APC,

Watch Video As Buga Crooner, Kizz Daniel, Is Arrested In Tanzania For Failure To Perform At A Show