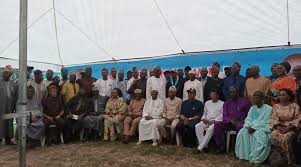 Posted By: The Gazelle NewsIn: News, PoliticsNo Comments
Print Email
The mantle of serving the party again fell on Honourable (Engr) Adekunle Olayinka as he was appointed a Director to serve on the All Progressives Congress Lagos State Campaign Council. The Council, consisting of 163 members, was recently inaugurated to drive the campaign activities of the party to victory come 2023.
As a long standing and core party technical resource member, the Directorate headed by Engineer Adekunle Olayinka covers political volunteer groups, political support groups, Diaspora groups, Organized Labour, Market Associations, Civil and Human Rights groups, Actors and Creative Art groups to mention but a few.
It is on official records that Honourable Olayinka has served the Party at several levels with all sense of commitment and total loyalty. He has manned the affairs of All Progressives Congress during the years when the Party was going through its merger activities. His close to two decades contributions and complete loyalty to the party coupled with his humble political service to his constituents show that he is a die-hard party member.
An Elderly member of the Lagos State Governance Advisory Council, said the newly appointed Director, Engr. Olayinka is a personality who sees serving the Party as a matter of service to humanity which is the best work of life.
‘’The appointment of all the Directors to serve on the Campaign Council is based on their knowledge and ability in Campaign Strategy, planning, mobilization, logistics and election management,” affirmed Hon. Pastor Cornelius Ojelabi, Party Chairman in his inaugural speech.
Engr. Adekunle Olayinka who is the Special Adviser to the Governor of Lagos State on Development Agenda For Western Nigeria Commission (South West Affairs) said he owes his appointment to the magnanimity of Asiwaju Bola Ahmed Tinubu, the APC Presidential Candidate and Governor Babajide Olusola Sanwo-Olu whose re-election as the Governor of Lagos State come 2023 is a mission to be accomplished.

The 2022 Committee To Nigerians: Ignore Speculators, Awe Aren’t Working For Any Aspirant