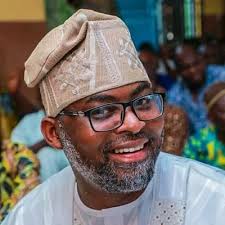 Posted By: The Gazelle NewsIn: News, PoliticsNo Comments
Print Email
The Deputy Chief of Staff to the Governor of Osun State, Prince Abdullahi Adeyanju Binuyo, has congratulated the Chairman-elect of the All Progressives Congress (APC) in the state, Prince Gboyega Famodun and other members of the Exco on their success at the state Congress of the party.
Prince Binuyo described the election of Prince Famodun and others as a clear demonstration of the trust and belief members of the party have in their ability to move the party to a greater height in the state.
“The outcome of the Congress and the election of Prince Famodun and the other Exco members was a clear confirmation of the trust and belief our members have in their ability to move this great party to a greater height,” he said.
He stated further that, “I am confident that the newly elected ExCo members will have  the support and cooperation of the party members in the state
“I also want to congratulate the Osun State Governor, Alhaji Adegboyega Oyetola for ensuring that all measures were put in place to ensure a rancourous-free Congress. The state government under Governor Oyetola was really up to the task by ensuring a conducive atmosphere for the Congress to take place”.
Prince Binuyo commended the State Congress Committee led by Hon Gbenga Elegbeleye for conducting a Congress in strict adherence to its rules and regulations.
“I’m impressed with the organisation of the Congress and it was a confirmation of the firm belief of the party and the Oyetola administration in the strict adherence to the rule of law and tenets of democracy,” Binuyo said.