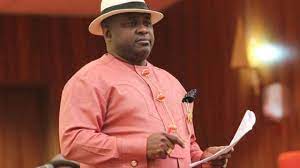 Posted By: The Gazelle NewsIn: News, PoliticsNo Comments
Print Email
Senator Bassey Albert Akpan, representing Akwa-Ibom North East Senatorial District, has resigned his membership of the People’s Democratic Party.
His resignation as member of the PDP was contained in a letter dated July 18, 2022.
The letter was read at the start of plenary on Wednesday, 20 July, 2022 by the Senate President, Ahmad Lawan.
Senator Akpan, who chairs the Committee on Petroleum Resources (Upstream), informed the upper chamber of his decision to join the Young People’s Party (YPP).
He explained that his defection was against the backdrop of agitations amongst members of the party who were dissatisfied with the absence of a level playing field during the governorship primaries in the state.
Bassey’s defection to the YPP brings the number of serving Senators in the party to two.
The letter reads, “I write to notify Your Excellency, the President of the Senate, the Senate leadership and the entire Senate of my resignation from the Peoples Democratic Party (PDP) with effect from July 15, 2022.
“I must admit that the PDP has offered me the opportunity to serve several capacities in government over the years, including serving as a Senator of the Federal Republic of Nigeria and I remain grateful to the party to that extent.
“However, it is now clear to me and my supporters that the center can no longer hold in the Akwa-lbom state chapter of the PDP since the party hierarchy decided to adopt and favour only one preferred candidate before and during the governorship primaries.
“The determination of the state chapter of the Party to support the preferred candidate could not even be halted by every attempt to call for a level playing field and its associated controversies.
“In view of the foregoing, the agitations have led to serious rancor and some steep differences in the ranks of the party and this had presented me with a compelling reason to consult my people on our future in the PDP.
“I must state that my supporters had earlier presented me with a nomination form after paying for same to encourage me to contest the party primaries for nomination of the Governorship candidate of the party but unfortunately, events leading to the party primaries for the governorship made it impossible for me to participate in the primaries.
“Therefore, I am constrained to bow to the wish of my people who have advice that in view of the state of affairs that exist now in the party, I should resign my membership of the party.
“As a result of the foregoing, I resigned my membership of the PDP and now joined the Young Progressives Party (YPP) which now becomes my new party.
“I thank you for your support and understanding. Please accept my sincere regards.”