By The Gazelle NewsDecember 24, 2022No Comments4 Mins Read 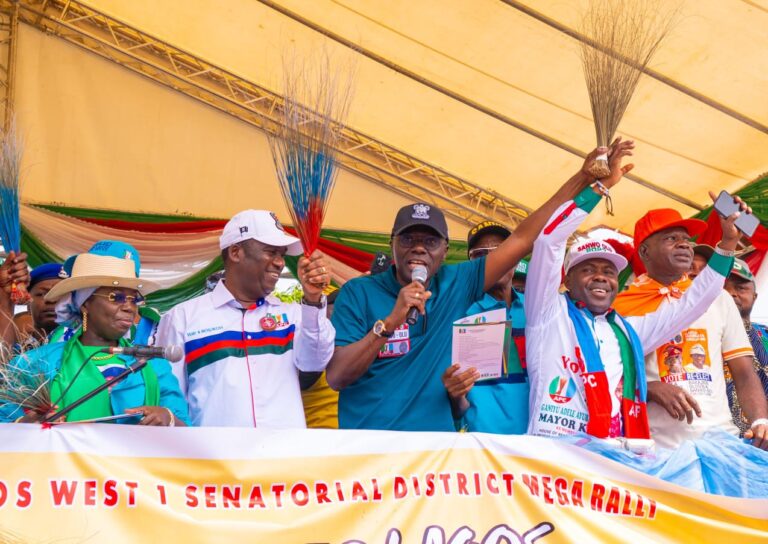 The party stalwarts and all candidates running for legislative seats in the State and National Assemblies led their supporters to the rally held at Ikotun Bus Depot located inside the secretariat of Igando-Ikotun Local Council Development Area of the state.

Sanwo-Olu is seeking election for another term on the party’s platform.

In the Governor’s entourage was the Deputy Governor, Dr. Obafemi Hamzat and members of the State Executive Council. 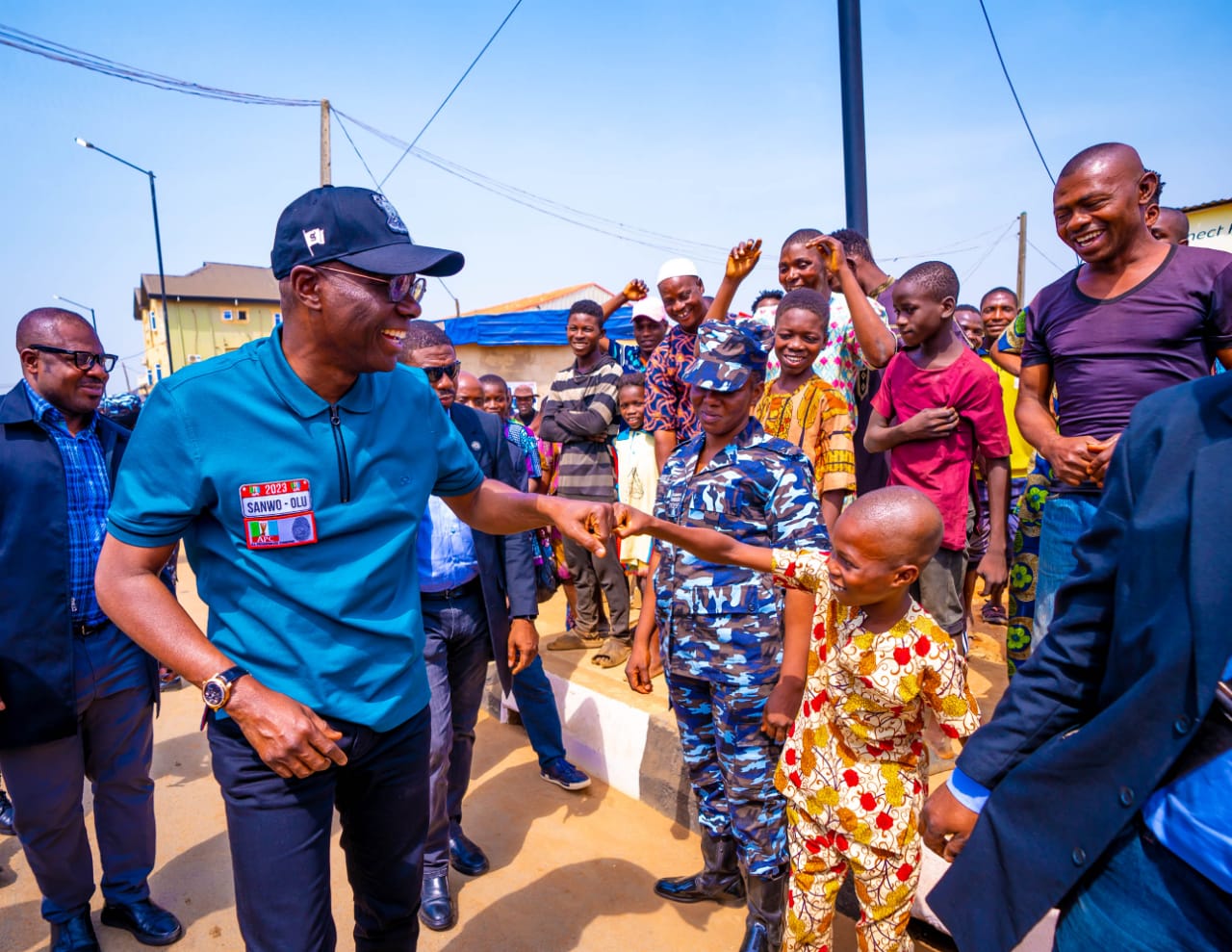 Sanwo-Olu, who had earlier commissioned a network of three roads and a jetty in Alimoso before moving to the rally ground, said his administration was on course in fulfilling and delivering its promises to the electorate in the area.

The Governor said Lagos West Senatorial District was a major beneficiary of the state’s Blue Rail Line infrastructure whose first phase of 13 kilometres was completed last Wednesday, 21 December, 2022. He said the second phase of the rail project, which will commence in January, would extend the infrastructure to Okokomaiko.

Sanwo-Olu reiterated that the election of APC Presidential Candidate, Asiwaju Bola Ahmed Tinubu, will have positive implications for Lagos, stressing that Alimoso, being the largest political constituency, had a significant role to make Tinubu’s presidential ambition a reality. 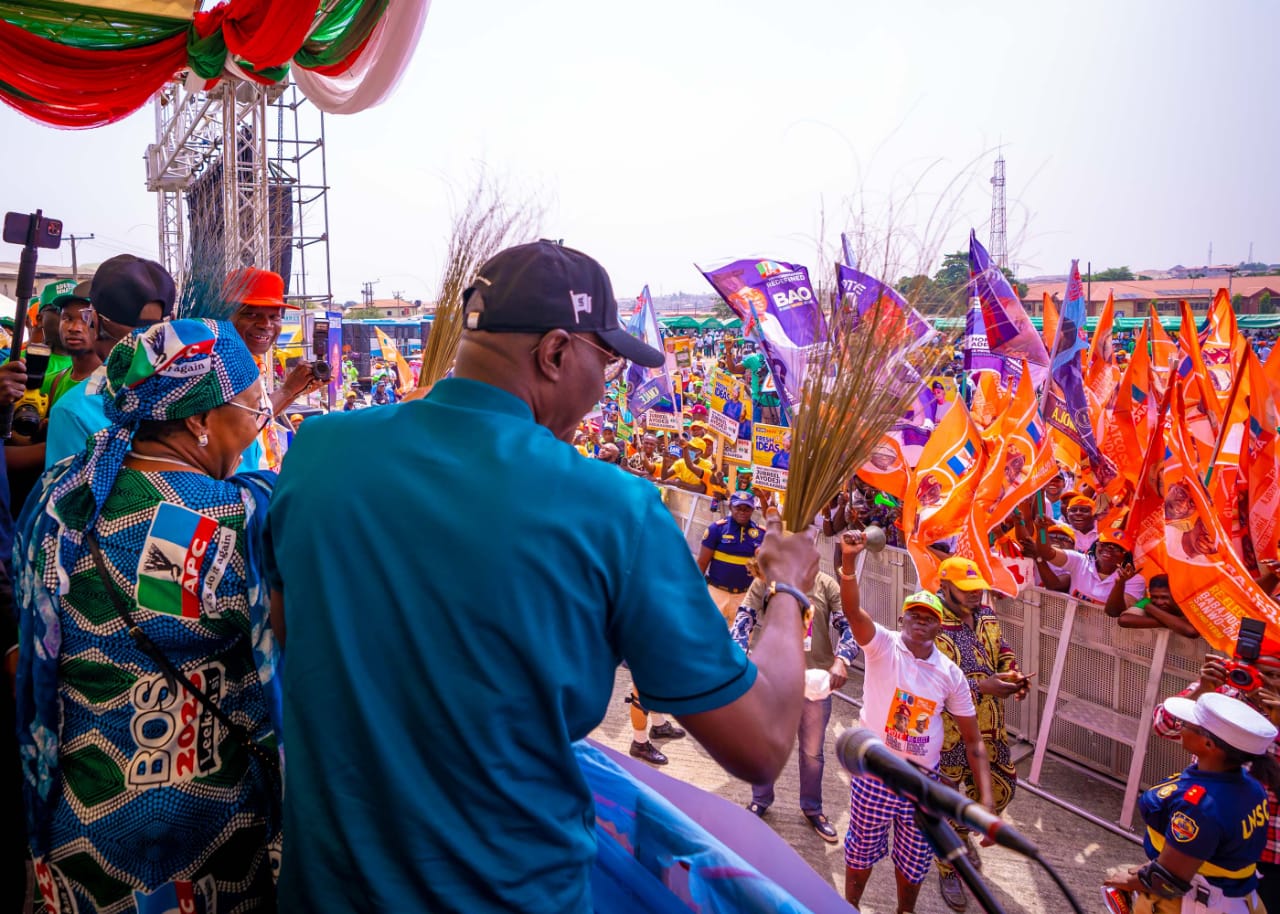 He said: “I believe with the meaningful and purposeful development we have brought to communities in Alimosho, APC has no rival in this constituency. Alimosho is being called Tinubu’s country because of the strong support you constantly show our leader. Now, this has become my second home as well.

“Our charge to you is to go out and tell your friends, neighbours and families the gospel of development you have seen and felt. All the candidates of APC need to be voted in for continuation of our programmes, which have touched your lives positively. From the presidency, which is Asiwaju Bola Ahmed Tinubu, down to legislative offices and to the governorship election, which I’m representing you.”

Sanwo-Olu urged the electorate to disregard the rhetoric of an opposition candidate, whom, the Governor said, had been going round the town with “laughable accusations” to belittle the APC’s development programmes in Lagos.

The Governor told Alimoso residents to point to projects executed in the area whenever his opponents came with wrong information about his Government. He urged voters to reject his opponents, telling them to suffocate the plans of opposition parties with their votes.

He said: “We have some inexperienced people who are calling themselves candidates of a certain opposition party, going to town to tell lies about us. Tell them non-starters have no chance in the governance of a city as large as Lagos. You must use your vote to reject them and suffocate their ill-fated ambition.

“Those who have yet to collect their voter cards should do so. On the day of election, your objective is not to argue or fight with anyone. All we need to do is speak with our vote by choosing the APC. This is the only political party that has brought tremendous changes and development to Lagos. We must now allow the aliens to distract us and reverse our progress.”

Lagos APC chairman, Pastor Cornelius Ojelabi, explained why the party should be allowed to continue in office, noting that Lagos under the APC leadership had become a model for good governance and responsive Government.

He urged the Alimoso residents to keep faith with the party and vote for all the candidates presented by the APC in the general elections.

Before the rally, Sanwo-Olu commissioned the newly-rehabilitated Isuti Road in Igando, Ishefun-Camp Davies Road and Ijon-Liasu Ojo-Ijo Road to bring relief to the residents and improve connectivity.