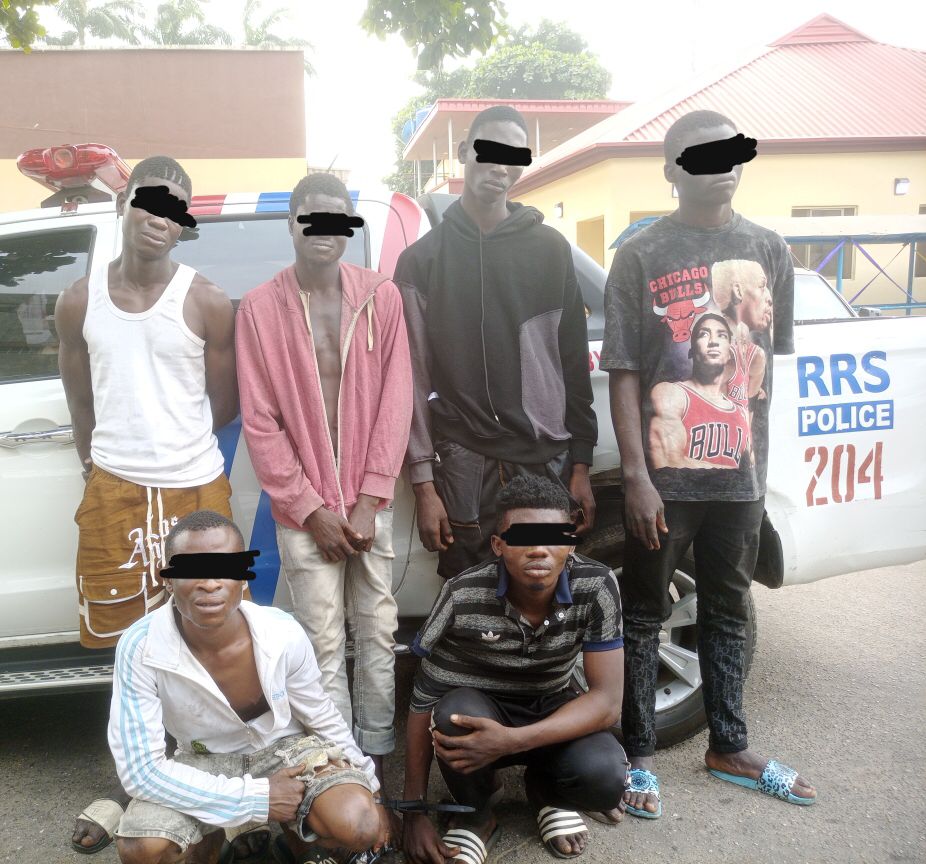 Posted By: The Gazelle NewsIn: News, SecurityNo Comments
Print Email
Officers of the Rapid Response Squad (RRS) have arrested six young men for stealing personal effects of couples whose vehicle had an accident on Monday night, 3 January, 2022 at Otedola Bridge inward Ojodu-Berger, Lagos.
The suspects are: Stephen God’s love, 21; Christopher Edema, 25; David Tobore Sodiq, 22; Joseph Hassan, 23; Adebayo Rashid, 23; and Sulaiman Akinwunmi, 30.
The six suspects, were arrested at the scene of the accident when Rapid Response Squad (RRS) officials got to the place after them. The suspects were met fighting over the personal effects of the accident victims rather than assisting them as at the time the policemen got there.
The arrival of the RRS Team led to the recovery of a handbag containing the couples’ personal belongings and an Android phone.  However, two Android phones belonging to the driver of the vehicle were missing. And, all efforts made to recover the two Android phones from the suspects proved abortive.
Preliminary investigations by the officers revealed that four of the suspects: Adebayo Rashid, David Tobore Sodiq, Stephen Godslove and Christopher Edema are ex – convict.
The six suspects were descending the slope of Otedola Bridge towards Olowopopo Road in groups when they witnessed the accident.
The suspects, according to the couples, “surrounded us and were robbing us while we were struggling to make it out of our vehicle. They were helping themselves with our phones and hand bag. Thank God RRS arrived the scene just in the nick of time.”
Luckily, while the victims’ vehicle was badly damaged, the couples did not sustain serious injuries.
Meanwhile, the Commander, Rapid Response Squad (RRS), CSP Olayinka Egbeyemi,k who condemned the actions of the six suspects after carefully listening to them directed that they be transferred to the Command’s Special Squad for further investigations and  prosecution.

Honourable Tolulope Akande-Sadipe: A Fallacious Icon Of The Democracy We Fought For?