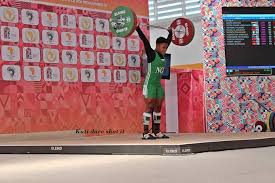 Posted By: The Gazelle NewsIn: News, SportsNo Comments
Print Email
Female weightlifter, Rafiat Lawal has won Nigeria’s second gold medal at the ongoing Commonwealth Games, reports thegazellenews.com .
Lawal triumphed in 59kg category at the weightlifting event of the ongoing Games to give Nigeria its second Gold medal and third medal overall at the event currently going on in Birmingham, England.
This is the third medal the country has won at the Games and they have all come from the weightlifting event.
On Saturday, 30 July, 2022, Adijat Adenike Olarinoye won in the 55kg class lifting a total of 203kg and setting a new Games record to secure the gold medal.
Earlier Sunday, 31 July, 2022, Umuoafia Edidiong Joseph won Bronze medal in the 67kg male category, and now Rafiat Lawal has added another Gold medal in the female 59kg class.

How Nigerians Can Have Their Way With Constitution Review Exercise – Lawan