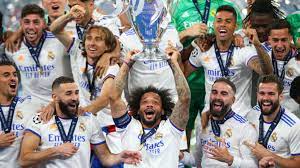 The 67TH edition of the UEFA Champions League drew to a close on the 28th of May in Paris, France as the record 13-time champions Real Madrid met 6-time champions, Liverpool, in the final with the Spanish La Liga winners extending their record to 14 titles with a hard-fought 1-0 victory. The Spanish team thoroughly deserved their victory as they overcame French champions PSG, defending champions Chelsea and Premiership winners Manchester City in successive rounds to reach the final. They entered the final as underdogs with most bookies making Liverpool the favourites.
The best betting odds for the finals were available at bet9ja soccer as this bookmaker is the premier betting site in Nigeria. The Real Madrid win paid bettors that backed them very handsomely. The Spanish side have won the title the hard way as they came back from the dead in the semi-finals and quarter-finals. In the final, they again showed their fighting spirit as Liverpool dominated possession but could not find a way past an inspired Thibaut Courtois in the Madrid goal and he rightfully walked away with the Man of the Match award. The tournament group stage started almost eight months ago in September with 32 teams being divided into eight groups of four.

The top two teams from each group advanced to the round of 16 while the third-placed team dropped down into the Europa League. The group stage saw most of the big guns of Europe comfortably advance to the knockout stage with the biggest casualties being Barcelona and AC Milan.
The stand-out performers in the group stage was undoubtedly Liverpool, Ajax and Bayern Munich who all maintained a perfect record of six wins from six matches. Liverpool became the first English club to ever achieve this feat. The round of 16 produced a few minor upsets as Ajax were knocked out by the less fancied Benfica while Atletico Madrid dumped Manchester United out of the competition. The highlight of this round was the tie between Real Madrid and PSG with Madrid
advancing despite losing the first leg. The star-studded French champions with Messi, Neymar and Mbappe in the team will have to wait at least another season to try and claim an inaugural Champions League trophy.

The quarter-finals produced one of the biggest shocks in recent history when Villareal knocked out German giants Bayern Munich thanks to a first leg win at home with a draw in the second leg enough to see them advance to their first ever Champions League semi-final. Manchester City squeaked through to the semis with a 1-0 aggregate win over Atletico Madrid in what turned into an ill-tempered second-leg match. Real Madrid needed extra time to defeat Chelsea after the tie was all square at 3-3 after the second leg. The team that had no such issues was Liverpool who cruised into the semi-finals 6-4 on aggregate against Benfica despite drawing the second leg at home.

Two English and two Spanish teams made up the last four with Villareal taking on Liverpool while the other English club Manchester City up against Real Madrid. Liverpool won 2-0 in their first leg tie at home against Villareal but were given a fright in the second leg as the Spanish team scored two early goals to even up the tie at halftime. The class and experience of the Liverpool side showed in the second half as they scored three unanswered goals to win the match 3-2 and thus the tie 5-2. All the drama was to unfold in the second semi-final as Manchester City took a 4-3 first leg lead into the second leg at the Santiago Bernabeu and when City scored in the second half the English champions looked set to be through to their first ever Champions League final. The tie was in their favour 5-3 up until the 89 th minute until substitute Rodrygo did the unimaginable and scored two goals in two minutes to take the tie into extra time with Karin Benzema netting to complete the most improbable of comeback wins.

There can be no doubt that Real Madrid deserved being crowned champions as they beat the best teams in Europe on route to the title. The two finalists were a class above all the other teams and this was further evidenced by each team having four players selected in the team of the tournament. The wait for a first-ever Champions League title for teams like Manchester City and PSG continues despite their dominance in their respective domestic leagues.

Oyebanji’s Mission For Consolidation: The Journey So Far

Lady, Three Others Convicted for Over $2000 Internet Fraud in Uyo