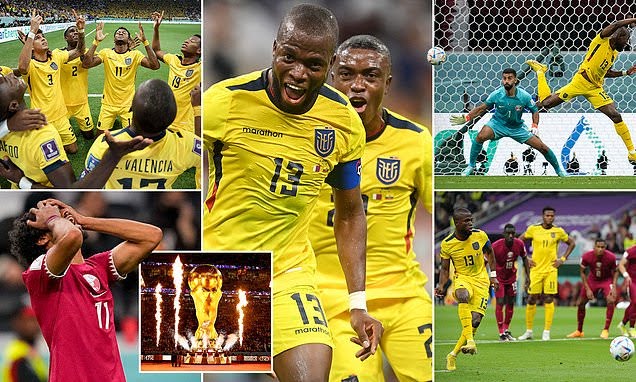 Posted By: The Gazelle NewsIn: News, SportsNo Comments
Print Email
Enner Valencia scored a first-half double as Ecuador overwhelmed hosts Qatar on their way to a routine 2-0 win in the opening game of the 2022 FIFA World Cup.
Valencia had an early header ruled out for a marginal offside call against teammate Michael Estrada, via a questionable VAR review, but he did not have to wait long to celebrate after winning and coolly converting a 16th-minute penalty.
It meant Ecuador’s captain became the first player in his country’s history to score four goals in World Cup finals, and he made it five after the half-hour mark, heading home Angelo Preciado’s wonderful right-wing cross.
Qatar will rue their joint-record scorer Almoez Ali passing up a glorious chance just before halftime but, in reality, Felix Sanchez’s side were nowhere close to the quietly building pre-match expectations, as they were comprehensively outplayed.

#EndSARS Protest: UN Calls For Implementation Of Recommendations Of Panel Of Inquiry