By The Gazelle NewsAugust 10, 2021No Comments2 Mins Read 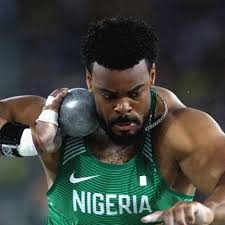 Share
Facebook Twitter LinkedIn Pinterest Email
Tokyo 2020 Olympics Shotput finalist,
Enekwechi Chukwuebuka, has threatened to sue Mr. Sunday Adeleye over false claim that he received money to take down the video clip  where he was washing his kits.
Adeleye in a video that has gone viral alleged that Enekwechi received the sum of $1000 to take down a video he was seen washing his T-shirt.
Enekwechi through his coach, Gabriel Opuana, denied receiving any money to take down the video clip, insisting that the video clip where he was washing his T-shirt was just to catch fun and not to ridicule or blackmail the government.
“Except Adeleye shows clear evidence or provide proof where the $1000 was given to Enekwechi and the person from whom he received the money in Court, Enekwechi won’t rest,” Opuana said
According to Opuana, the shot putter apologised to the Sports Minister when the  the video became the subject of controversy.
He said for Adeleye to accuse Ebuka of receiving money was the highest point of blackmail.
“Adeleye must proof in court that Chukwubueka received money, otherwise he must tender an unreserved apology for the cheap blackmail,” the coach said.
Ebuka, as he is popularly called, does not  have any issues with any one, but this won’t just pass like others.
Opuana insisted that the athlete is bigger than $1000 and would not let this blackmail go without a good fight to clear his name.
“I don’t meddle in Nigerian sports politics, nobody should drag me into something I don’t know anything about,” said Enekwechi