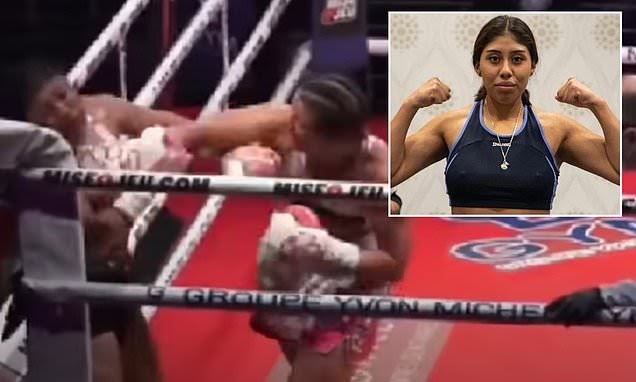 Posted By: The Gazelle NewsIn: Metro, News, Sports, TrendingNo Comments
Print Email
An 18-year-old Mexican boxer has died five days after being injured in a fight in Montreal, Canada.
Jeanette Zacarias Zapata died on Thursday, 2 September, 2021 with her husband and trainer Jovanni Martinez by her side, as he was at the troubling moment she was injured.
The teenager collapsed during the fourth round against Marie-Pier Houle Saturday night, 28 August, 2021.
Zapata suffered a series of power punches in the corner of the ring and, after a solid uppercut, the Mexican seemed stunned near the end of the fourth round.
A final right hook caused Zapata’s mouthguard to fly out and left her unable to return to her corner after the bell rang.
Zapata, who appeared to convulse while still standing, was joined by Martinez, who quickly laid her down in the ring.
The on-site medical team rushed to her side and she was immobilised on a stretcher before being rushed to a hospital by ambulance.
“It is with great sadness and torment that we learned, from a representative of her family, that Jeanette Zacarias Zapata passed away this afternoon at 3.45pm,” promoter Yvon Michel said.
“The entire team at Groupe Yvon Michel is extremely distressed by this painful announcement.
“We would like to offer our most sincere condolences to her family, loved ones, friends and especially her husband, Jovanni Martinez, who was at her bedside until her last moments.
“Jovanni is devastated and extremely upset. Under the circumstances he does not wish to comment, therefore we ask that you respect his decision and allow the family to have their privacy.”
Michel vowed “full collaboration and complete transparency” in the Quebec coroner’s investigations.
Houle said she was “devastated” by the “terrible news” that Zapata had died.
“I offer my deepest condolences to her family and to her partner Jovanni Martinez,” she said.
“May God enlighten her soul and receive her in her glory.”
Yvon Michel had said in a briefing on Sunday, 29 August, 2021 that Zapata was placed in a medically induced coma to sedate her and relax her body and brain.
He said the following two to five days would be “critical”.
Source: 7news.com.au

Over 300 Residents Of Abeokuta Benefit From Community Medical Outreach