By The Gazelle NewsMarch 4, 2022No Comments2 Mins Read 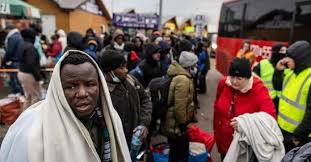 Share
Facebook Twitter LinkedIn Pinterest Email
Four hundred and seventy-five (479) Nigerians may have been  secured by Monday evening by the Nigerian government in the massive deployment of strategies to get its citizens liberated from Ukraine which is presently under Russian attack.
A large percentage of the 479 are already across the Ukrainian border in Hungary and Poland with the rest as at press time being assisted to get to freedom.
A signed statement on Sunday but released to the Nigerian media on Monday by the Permanent Secretary in the Ministry of Foreign Affairs, Ambassador Gabriel Aduda said: “In the last 24 hours, officials of the Nigerian Embassy have received 130 Nigerians safely at Bucharest, Romania where they have been provided accommodation and will be documented, while we finalise arrangements to bring them back home.
“Also, officials at Budapest, Hungary have received and accommodated 74 Nigerians safely, where they are being documented for subsequent travel arrangements back to Nigeria.
“We are expecting another batch of about 200 into the city of Budapest, tomorrow, Monday.
“In Warsaw, Poland we have received 52 Nigerians and 23 are being processed at the Polish Government Reception Point at Hala Kijowska, Milny 90, 37-552 Milny, which is near the border of Korczowa-Krakowiec. The camp is well organised with beds and beddings, food, heating, clothing and medicals for evacuees.”
Aduda, in the statement, assured “Nigerians that all hands are on deck and arrangements are being put in place to effectively evacuate our citizens, in safety and dignity.”