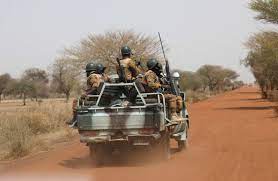 Posted By: The Gazelle NewsIn: News, WorldNo Comments
Print Email
The United Nations Secretary-General,Antonio Guterres has condemned the coup d’etat in Burkina Faso, insisting that the celebration on the streets in the country could have been orchestrated to show that it was the wishes of the people.
Gutteres, in his reaction to the military take-over, said:  “I am deeply concerned with the recent coup d’état in Burkina Faso.  The role of the military must be to defend their countries and their peoples, not to attack their governments and to fight for power.
“We have, unfortunately in the region, terrorist groups, we have threats to international peace and security. My appeal is for the armies of these countries to assume their professional role of armies, to protect their countries and re-establish democratic institutions.”
On the support given to the coup by citizens who trooped to the streets to celebrate the take-over, the UN Secretary General said: “There are always celebrations for these kinds of situations. It’s easy to orchestrate them, but the values of democracy do not depend on the public opinion at one moment or another. Democratic societies are a value that must be preserved. Military coups are unacceptable in the 21st century.”

….. So That Living In Ogun Could Be Better, More Abundant

LIRS Charges Taxable Residents To File Their Returns For 2021 Assessment