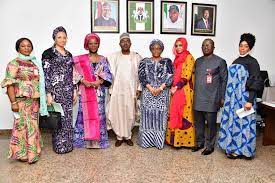 Posted By: The Gazelle NewsIn: News, WorldNo Comments
Print Email
In 2019, with the support of the European Union and the United Nations Office on Drugs and Crime, UNODC, Nigeria officially launched its first ever comprehensive national survey on drug use and health – Drug Use in Nigeria 2018.
The survey revealed that Nigeria has over 14.3 million people who use drugs and 1 in 4 of these population is a woman or girl. Even more alarming is the data that indicates that only 1 in 20 people in treatment for using drugs, is a woman.
Whilst there is a generally acknowledged dearth of drug treatment services in Nigeria, the gap is even more disproportionate for female drug users who for a myriad reason are unable to access treatment as easily as their male counterparts.
This is further buttressed by the findings of the World Drug Report 2022.
It is therefore no surprise that members of the Nigerian Governors Wives Forum are at the forefront of advocating for improved access to drug prevention and treatment services in Nigeria.
After all, it was on the initiative of the First Lady of Nigeria, Hajia Aisha Muhammadu Buhari, that the Presidential Advisory Committee on the Elimination of Drug Abuse (PACEDA) was first established in 2018 – recommended a series of targeted interventions for elimination of drug abuse in Nigeria.
The active advocacy of the First Lady of Kebbi State Nigeria, Dr Zainab Shinkafi Bagudu, led to the establishment of a community-based drug treatment center as well as introduction of UNPLUGGED – a school-based drug prevention programme in State-owned Secondary Schools in Kebbi.
As a great step forward, the Nigeria Governors Wives Forum led by the First Lady of Ekiti State, Erelu Bisi Fayemi adopted drug abuse as a flagship project “to address the alarming problem of drug abuse in our communities.”
Encouraged by the active advocacy by the Governors Wives Forum, NDLEA and the UNODC within the context of the EU-funded Project “Response to Drugs and Related Organised Crime in Nigeria” partnered to sensitize the Forum on critical issues related to drug use, prevention, treatment and care.
The 2-day sensitisation event, organized in conjunction with World Drug Day, held on 28 and 29 June 2022, had in attendance, the wife of the Vice President of Nigeria, H.E Mrs. Dolapo Osinbajo as Special Guest of Honour as well as the First Ladies of  Abia, Adamawa, Akwa Ibom, Bayelsa, Benue, Delta, Ekiti, Enugu, Imo, Kaduna, Kebbi, Kwara, Ogun, Niger, Sokoto, Taraba, and Yobe States, and the representatives of all other States.
Other participants included, the senior management of the NDLEA led by the Chairman/Chief Executive Brig Gen. Mohamed Buba Marwa (rtd.), the UNODC Country Office Team led by the Country Representative Dr Oliver Stolpe, and representative of the European Union Delegation (EUD) to Nigeria and ECOWAS, Ms. Eleni Zerzelidou.
Speaking during the event, the NDLEA Chairman/Chief Executive, Brig. Gen. Mohamed Buba Marwa urged the Forum to spearhead the establishment of State Drug Control Committees (SDCCs) in their respective States to facilitate the implementation of drug control responses at all levels of government and society.
Mrs. Dolapo Osinbajo, Wife of the Vice President of Nigeria, remarked that the sensitization exercise will enhance participants’ knowledge and skills in implementing appropriate drug control interventions in health and humanitarian crises, which is also the theme for this year’s World Drug Day. She emphasized that we “all need to contribute our quota to the national drug control efforts.”
The UNODC Country Representative, Oliver Stolpe urged the Governors Wives not to lose sight of the public health crisis caused by drug use, noting that what is being invested right now is nowhere near sufficient to cater for the needs of millions of persons living with a drug use dependency. He therefore solicited their support for the implementation of UNPLUGGED across the 27,000 public and private secondary schools in the country as well as providing access to quality drug treatment to the millions of persons, in particular women and girls, living with a drug use disorder by: (i) creating drug treatment facilities in all states, (ii) establishing drop-in centers across all LGAs, and (iii) equipping  primary health care providers with basic drug treatment, counselling and referral skills. The EUD representative, Ms. Zerzelidou, noted that the Governors Wives, with their influence, can pave the way for more initiatives on drug demand reduction.
The two-day proceeding exposed Governors Wives to core sensitization modules on drug prevention, treatment and care (DPTC), along with several drug prevention and treatment initiatives being implemented under the “Response to Drugs and Related Organized Crime in Nigeria”, including  sport based prevention programme – Line up Live Up (LULU), Strengthening the Family Programme(SFP), and UNPLUGGED, the latter being implemented in all 104 unity secondary schools run by the Federal Government, as well as in Bayelsa and Kebbi states.
The UNPLUGGED programme is also being implemented in selected schools in Oyo, Rivers and Kano States in partnership with the MTN Foundation through its Corporate Social Responsibility (CSR) intervention – the Anti Substance Abuse Programme (ASAP).
At the end of the event, the Forum adopted a communique outlining the actions the First Ladies will take to strengthen drug prevention, treatment and care in their respective states.

Eid-l-Kabir: Oyo Opens Praying Grounds But Says Social Distancing Must Be Adhered To