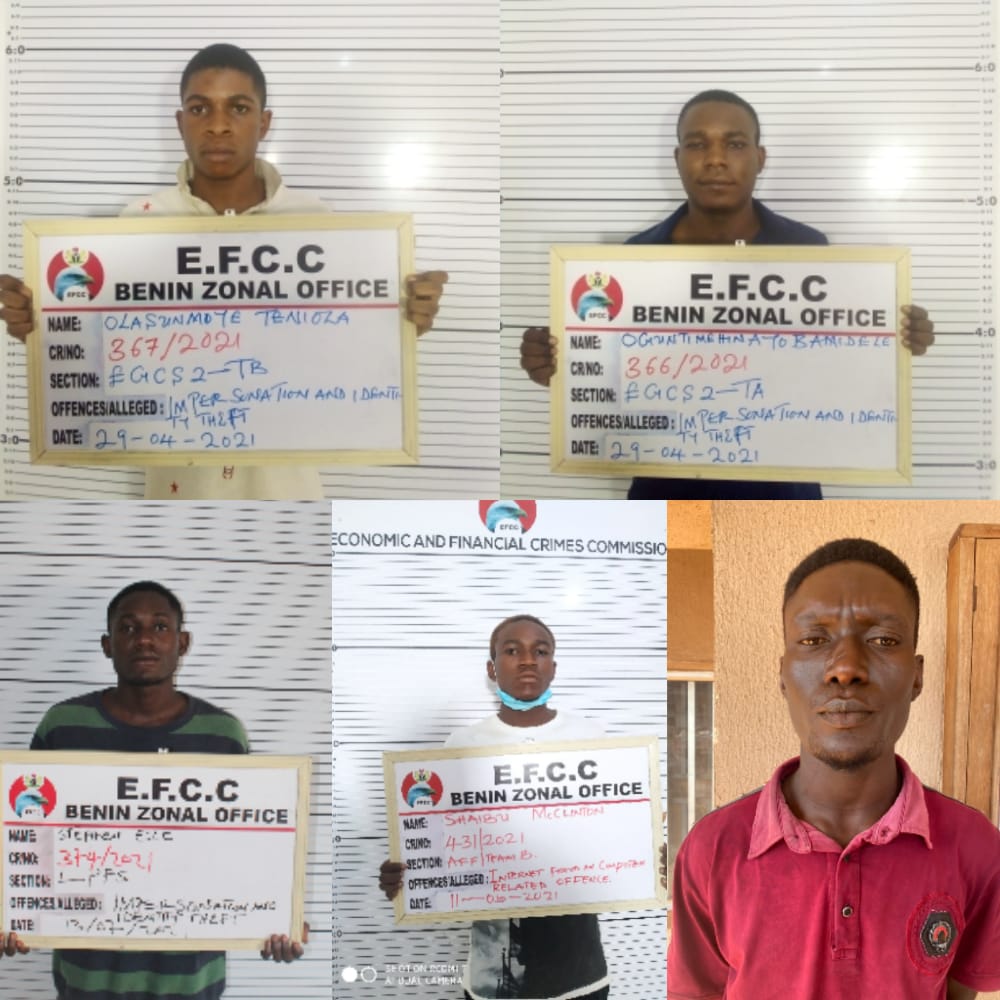 They are Shuaibu Macclinton, Olasunmoye Teniola, Eze Stephen, Oshodi  Nelson Ufo and Ayobamidele Temitope Oguntimehin. The quintet were arraigned on one court charge each for  offences bordering on impersonation and obtaining by false pretence.

The charge against Macclinton reads: “that  you  Shuaibu Macclinton ( a.k.a Larry Benson, Davidd Robert, Scott Benson, Kelly Nice , Patrick Donald  and Kristen Robinson) on or about May 9, 2021 within the jurisdiction of this Honourable Court did fraudulently impersonate the identity of Larry Benson by sending a picture of Christiana Fernandez,  a lady in the United States of America through the internet which picture and identity you claimed to be your own  with intent to obtain money from her and you thereby committed an offence contrary to section 22 (2)(b)(ii) of the Cybercrime (Prohibition, Prevention, Etc) Act 2015  and punishable under section 22(2)(b)(in) of the same Act”.

The charge against Oshodi Ufo reads: “that you Oshodi Nelson Ufo (aka William Brad Pitt) sometimes in 2021 in Benin City, Edo State within the jurisdiction of this Honourable Court did impersonate the identity of William Brad Pitt, an American actor by fraudulently sending documents to one Thiammy Dolan through the internet which document you claimed emanated from the said William Brad Pitt with intent to gain advantage for yourself and thereby committed an offence contrary to section 22 (2)(b)(ii) of the Cybercrime (Prohibition, Prevention, Etc) Act 2015  and punishable under section 22(2)(b)(in) of the same Act”.

They all pleaded guilty to the charge preferred against them by the EFCC.

In view of their  plea, prosecution counsel, I.M Elody prayed  the court to convict and sentence the defendants in accordance with the plea bargain agreement between the parties

Justice Shuaibu also  ordered  that  phones recovered from them during  investigation  be forfeited to the  Federal Government of Nigeria. The convicts are also to undertake in writing to be of good behaviour.