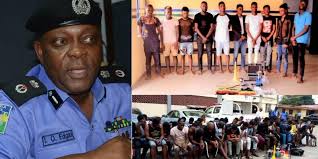 The Lagos State Police Command on *Wednesday August 28*,said it has arrested 57 persons suspected to be involved in homosexual activities in the Egbeda area of the state.

The Commissioner of Police, CP Edgal Imohimi, confirmed the arrest to newsmen during a news conference.

He said that the suspects were picked up on Monday at 2 a.m. while they were performing gay initiation rites for newly recruited members. 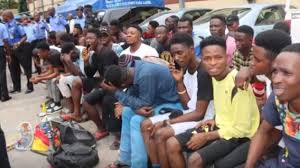 “Intelligence gathered revealed that some youths will be initiated into a Gay/Homosexual Club between 1 a.m and 2 a.m. at Holand hotel (Kelly Ann ) & Events Centre, located at No. 3-7, Adenrele St., Egbeda, an action contrary to Section 1 (1) of Same Sex Marriage, Act 2014 which punishment is 14 years in jail if found guilty.

“Consequent upon this, some operatives from the Shasha and Idimu Police stations stormed the venue and met no less than 80 young men but 57 were arrested. ” 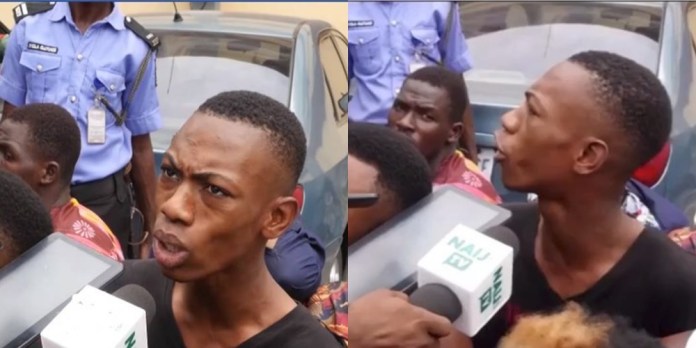 “They were taking different types of drinks, including banned substances such as Tramadol, and Shisha laced with substances suspected to be marijuana.

“As soon as they sighted the Police, they ran into different directions, but the team arrested 57 of them,” he said.

The *Commissioner of Police* said that investigation into the case is ongoing and that the suspects would be charged to court soon, as he vowed that those that escaped will be arrested and traced via attendance register recovered at the scene. 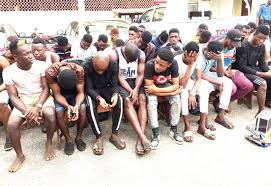 However, some of the suspects who spoke to journalists denied the allegations.

Also James Obudu “I’m not gay, I’m a dancer and I was there to perform before I was arrested. I’m a responsible citizen and I work at the Alimosho General Hospital as a counsellor for those living with HIV,”.

Another suspect, Samuel Olarotimi, 22, a graduate of Mass Communication from the Yaba College of Technology, said that there were other females in the hotel who were not arrested.

“I was there for a birthday party which started late. About eight ladies were at the bar with us, while some other ladies were dressing up in their rooms.

“I don’t know why the Police refused to arrest the females but brought us here as alleged homosexuals,” he said.

Police Confirm Arrest of Four Kidnap Suspects, Others In Abia