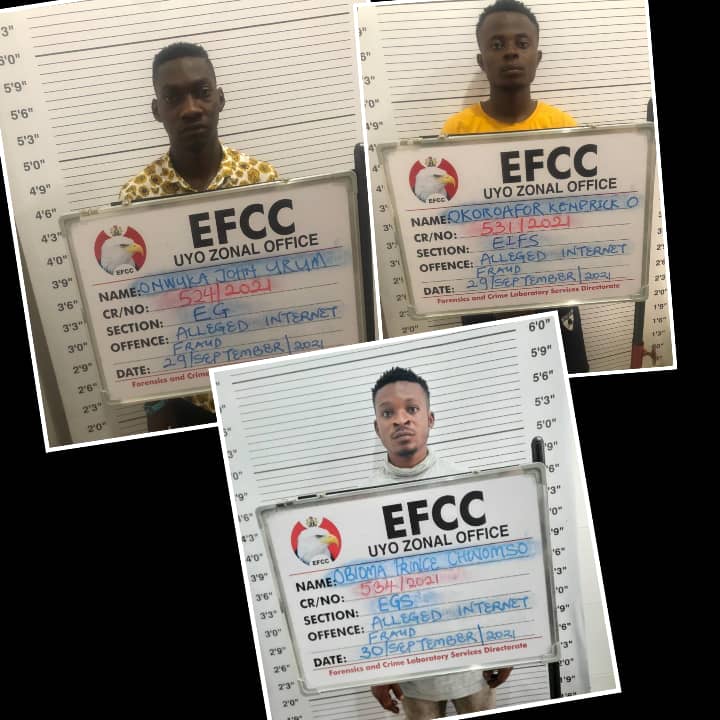 The defendants were among the internet fraud suspects popularly known as ‘yahoo-boys’, arrested by operatives of the Uyo Zonal Command of the EFCC on Wednesday September 29, 2021 at World Bank Estate Umuahia, Abia state.

The trio pleaded guilty to the separate one count charge preferred against them by the Commission.

In view of their guilty plea, Justice Ojukwu convicted and sentenced the defendants to a fine of One Hundred Thousand Naira (N100, 000), or six months imprisonment each, in the event that they’re unable to pay the stipulated fine.

The court also ordered that all the instruments used in perpetrating the crime be verified and forfeited to the Federal Government of Nigeria. The forfeited items are: iPhone 12, Apple IPad, a laptop, Techno Spark 7 phone, Itel 2106 phone and a Techno Spark 2 phone.

Furthermore, Onwuka John and Okechukwu Kendrick were ordered to pay the sums of N1.500 million and $500 respectively, as restitution to their victims through the Commission.