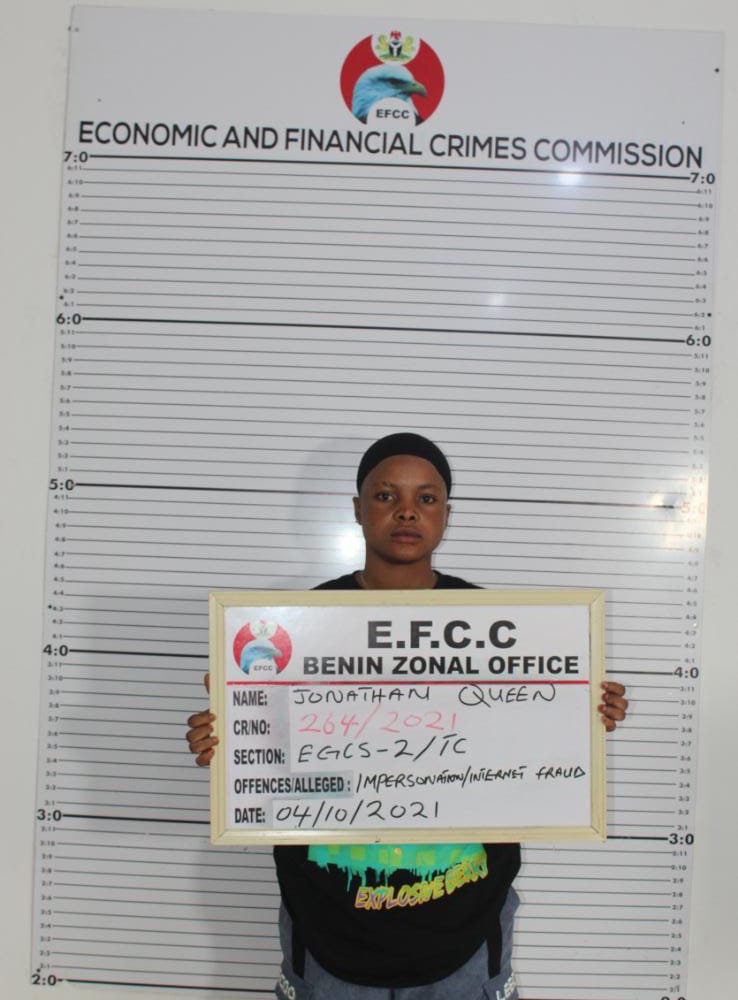 The Benin Zonal Command of the Economic and Financial Crimes Commission, EFCC on Wednesday November 3, 2021 secured the conviction of Wisdom Ogharadoro and Jonathan Queen on one count charge of impersonation before Justice F. O. Olubanjo of the Federal High Court sitting in Asaba, Delta State. 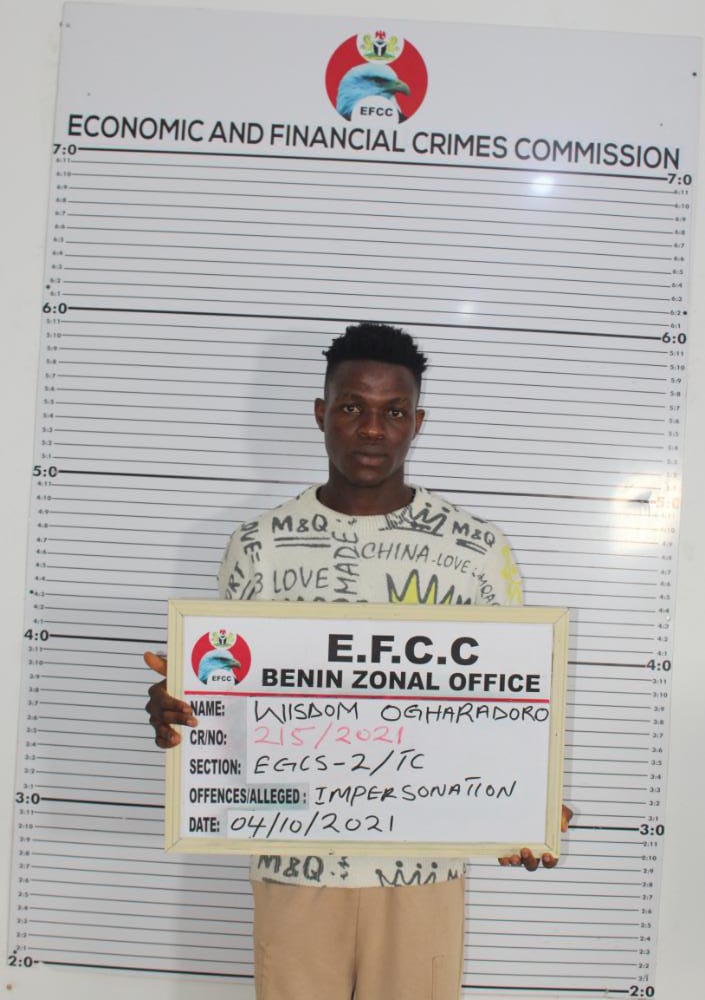 Ogharadoro was arraigned for fraudulently impersonating the identities of Mary Harry, Jeff Handrick, Wendy Binary and Jerry Williams (all white men) in order to defraud unsuspecting victims while Queen impersonated Sophia Rodriguez, a United States of America citizen to send fraudulent documents and pictures to one Roberto Arnoldo.

Upon arraignment, the defendants pleaded guilty to the charge when it was read to them.

In view of their plea, EFCC counsel, K .Y. Bello prayed the court to convict and sentence the defendants in accordance with the plea bargain agreement between the prosecution and the defendants.

Counsel to the defendants, Igbuan .P. Ilofuan pleaded with the court to temper justice.

Justice Olubanjo convicted and sentenced Ogharadoro and Queen to three years imprisonment with an option of N200, 000 fine each. The judge also ordered that items recovered from them during investigation be forfeited to the Federal Government of Nigeria.

Collins is alleged to have sometime in 2018 and 2019 fraudulently impersonated the identity of one Leonard Rico, a white man in his Gmail account and through that platform sent documents to unsuspecting ladies with intent to defraud them of their hard-earned monies.

One of the charge reads: “that you Mathew Collins ( a.k.a Leonard Rico ) sometimes between 2018 and 2019 in Warri, Delta State within the jurisdiction of this Honourable Court did fraudulently impersonated identities of one Leonard Rico, a white man, in your Gmail account by sending documents to unsuspecting ladies through the internet which documents you claimed emanated from the said Leonard Rico with the intent to obtain money from the ladies and you thereby committed an offence contrary to Section 22(2)(b)(ii) of the Cybercrime (Prohibition, Prevention, Etc) Act 2015 and punishable under Section 22(2)(b)(IV) of the same Act” .

The defendant pleaded not guilty to the chargeS preferred against him, prompting the prosecution counsel, K .Y. Bello to pray the court to fix a date for trial.

However, counsel to the defendant, O .F. Ajayi pleaded with the court to allow his client continue on his administrative bail earlier granted him by the EFCC, assuring that he will be available to face his trial.

Justice Shuaibu adjourned the matter till February 1 and 2, 2022 for hearing while the defendant is to continue on his administrative bail.

Police Arrest Greedy Husband + 3 Others For Masterminding Abduction, Gruesome Murder Of His Wife