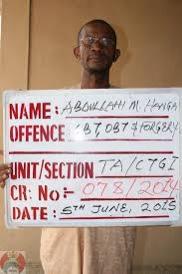 Lawyer To Spend 24 Months In Prison For Forgery

The Kano Command of the Economic and Financial Crimes Commission, EFCC, has secured the conviction of a Kano- based lawyer, Abdullahi Mohammed Hanga before Justice Aisha Mahmud of the Kano State High Court sitting in Kano

Hanga was jailed on Friday, June 24, 2022, after being found guilty of forgery based on four-count charges bordering on uttering and forgery preferred against him by the EFCC.

At the point of arraignment, he pleaded not guilty to the four count charges, thereby setting the stage for full trial.

In the course of the trial, prosecution counsel, Musa Isah called a total of four witnesses and tendered many documents that were admitted as exhibits by the court.

In his judgment, Justice Mahmud found the defendant guilty on count 3 but discharged and acquitted him on counts 1, 2 and 4.  He was subsequently sentenced to two years imprisonment or an option of fine of N250, 000.

Hanga’s journey to prison started when a petitioner alleged that he sold a property meant for a specified buyer already named in a document, to one of his relations and forged the prepared document to reflect the name of the new buyer.  He also converted the proceeds of the sale of the property to his personal use.