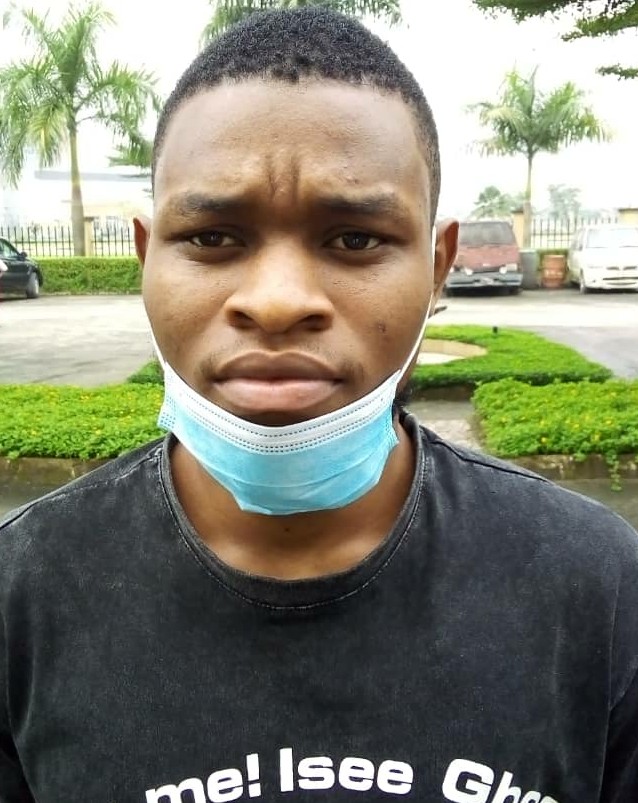 The Economic and Financial Crimes Commission (EFCC), Uyo Zonal Office, on Monday July 12, 2021 arraigned one Obasi Ugochukwu, a Computer Science student of the University of Calabar before Justice T. B. Adegoke of the Federal High Court sitting in Uyo, Akwa Ibom State, for alleged internet fraud.

Ugochukwu pleaded ‘not guilty’ to the two count charge of criminal diversion and impersonation preferred against him by the EFCC.

One of the counts reads, “That you Obasi Ugochuwku (a.k.a Mandy Eggwhite, and  Alice) sometime in October, 2020 in Nigeria within the jurisdiction of this Honourable Court with intent to obtain property and gain advantage for yourself, fraudulently presented yourself as Mandy Eggwhite and defrauded one Donald Schmitz in the sum of One Thousand, Fifty US Dollars ($1,050) and thereby committed an offence contrary to Section 22 (2)(b)(i) of the Cybercrime (Prohibition, Prevention Etc) Act, 2015 and punishable under Section (22)(2)(b)(iv) of the same Act.

“And you possess documents containing false pretence to wit; chat messages printed from your iPhone 11 Pro mobile phone which documents you knew contains false pretence and thereby committed an offence contrary to Section 6 of the Advance Fee Fraud and Other Fraud Related offences Act 2006 and punishable under Section 9(1)&(2) of the same Act”.

In view of his plea, the prosecuting counsel J. O. Abolarin prayed the court to remand the defendant and fix a date for trial to enable the prosecution prove its case. But the defence counsel I. J. Bassey immediately moved the motion for the bail of his client.

But before adjourning to September 21, 2021 for commencement of trial, Justice Adegoke granted the defendant bail in the sum of N5 million and two sureties in like sum. The sureties must present three years tax clearance certificate, and must reside within the jurisdiction of the court.

The sureties who must be Grade Level 14 officer and above from the Ministry of Finance of the Akwa Ibom State civil service, shall attend the trial of the defendant at each adjourned date and shall give undertaking to that effect.

The defendant was remanded at the Correctional Centre, pending the fulfilment of the bail conditions.

In a related development, the trial of two others; Asuquo Emmanuel Unyenyin and Anne Felix Idiong before Justice Adegoke were stalled as Anne Idiong whom the Commission had earlier granted an administrative bail failed to show up in court for arraignment. According to her lawyer, Udeme Tom, the defendant had to travel out of the state to attend to her health.

Asuquo Emmanuel Unyenyin though present in court, could not take his plea as he had earlier indicated his intention to plea bargain

The Judge adjourned the case till September 21, 2021 and July 25, 2021 respectively for their arraignment, and ordered Asuquo remanded at the Correctional Centre.