By The Gazelle NewsMay 8, 2022No Comments4 Mins Read

Share
Facebook Twitter LinkedIn Pinterest Email
Two pregnant women are among drug traffickers arrested by operatives of the National Drug Law Enforcement Agency, NDLEA, at the Murtala Muhammed International Airport, MMIA, Ikeja, Lagos for attempting to import and export illicit drugs through the airport in the last week.
The first to enter the Agency’s dragnet is a Brazilian returnee, Nworie Phillip Chikwendu who was arrested on Tuesday May 3rd during an inward clearance of passengers on Qatar Airways flight from Sao Paulo, Brazil enroute Doha to Lagos. 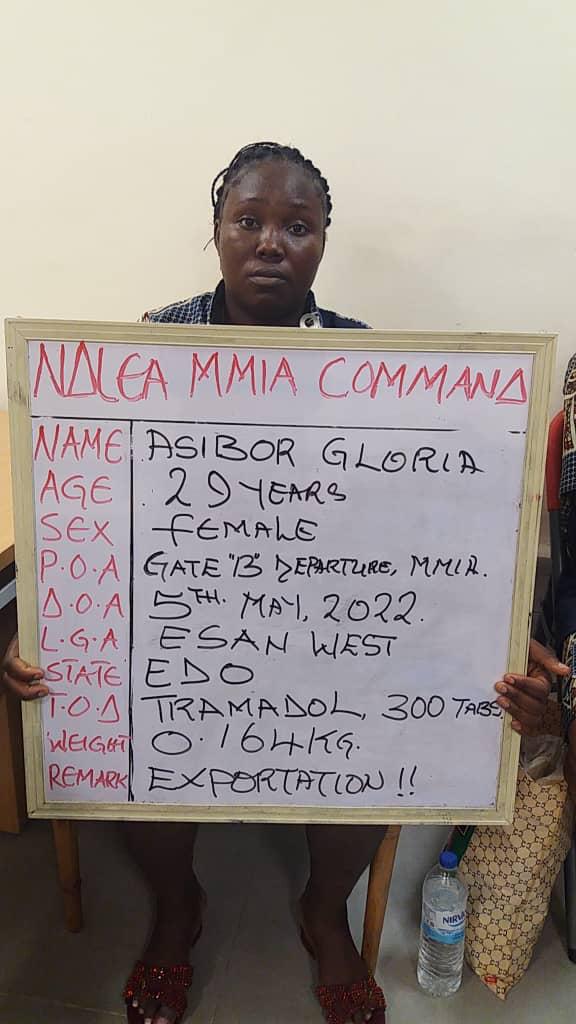 During a thorough search of his luggage, two parcels of cocaine were discovered concealed in a pair of brown slippers hidden in his ox blood backpack. A further search of the pair of black slippers worn by the suspect also led to the recovery of additional two parcels of cocaine built into the soles of his foot wears, bringing the total to four parcels weighing 800grams.
When undergoing preliminary interview, Nworie who claimed to be a barber in Sao Paulo, said he came to Nigeria for the burial of his father. He confessed he decided to get into the criminal act because his trip was sponsored by his Brazil-based friend who gave him the drug to deliver in Lagos for a fee of N2, 000, 000. 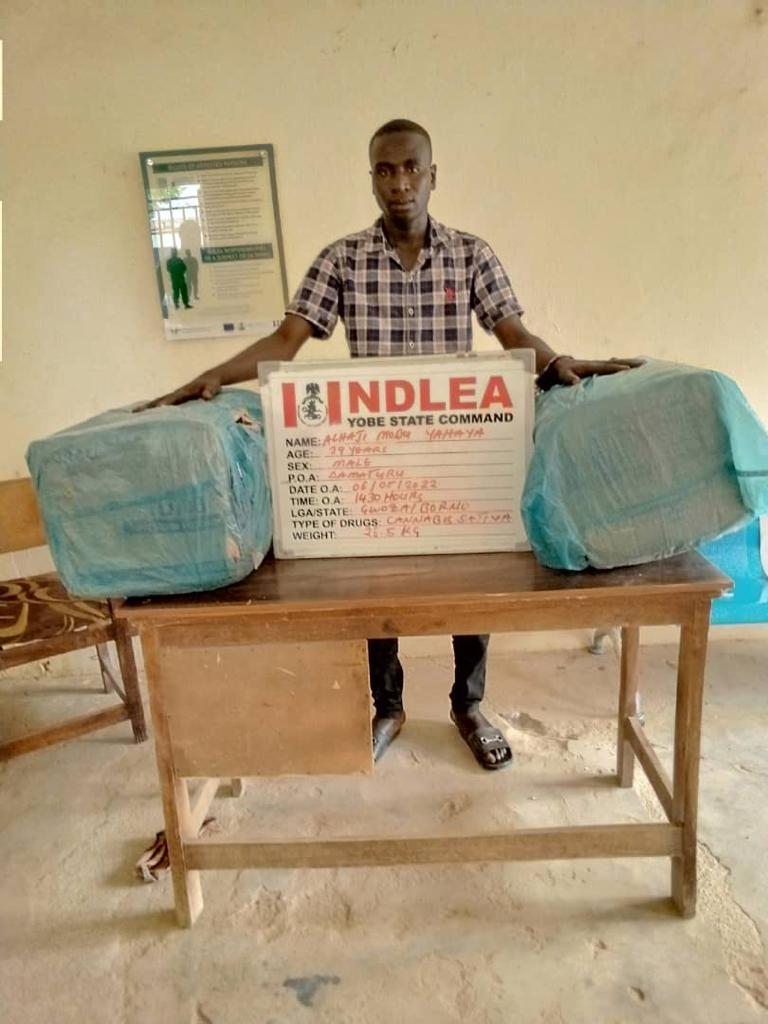 The following day, Wednesday 4th May, NDLEA operatives at the SAHCO export shed of the airport intercepted some cartons of alcoholic drinks suspected to contain illicit drugs. A freight agent who brought the consignment for export to Dubai, UAE, Shola Ogunrinde was immediately arrested while a follow up operation led to the arrest of a pregnant woman, Mrs. Seun Babatunde, who operates an alcohol joint in Pleasure area of Iyana Ipaja. 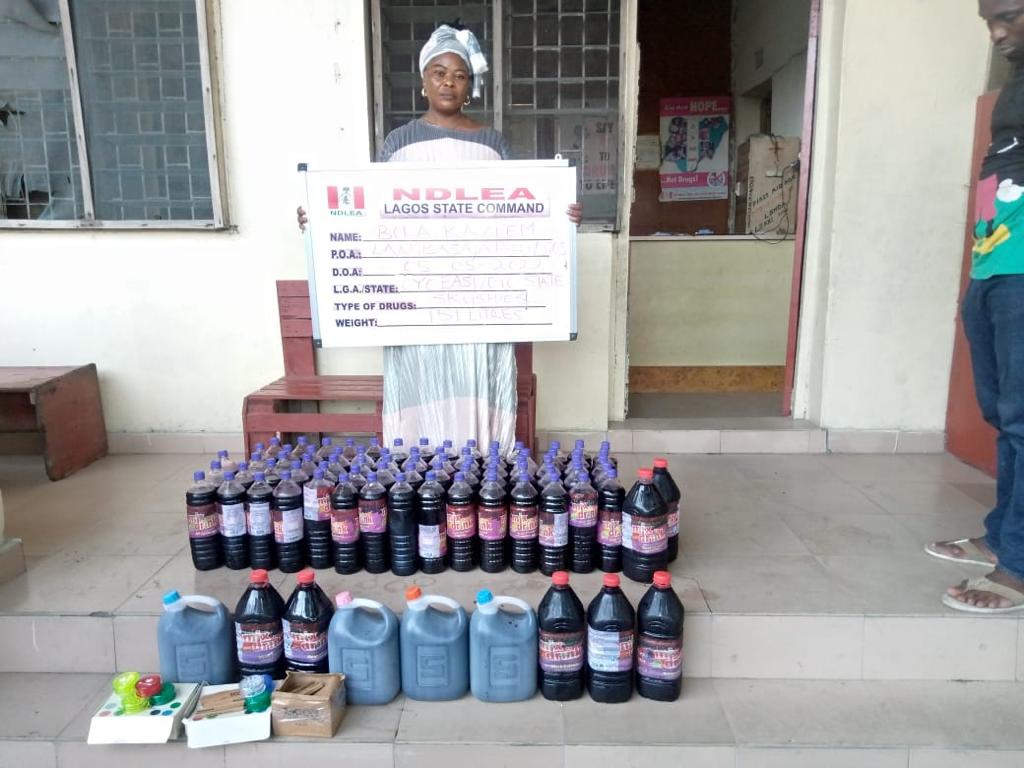 When the cartons were opened in the presence of the agent and the pregnant owner, seven parcels of cannabis and a sachet of ecstasy drug (MDMA) were found concealed inside Cans of black bullet alcoholic drinks. In her confession, Mrs. Babatunde claimed the drugs were being sent to her husband who lives in Dubai. 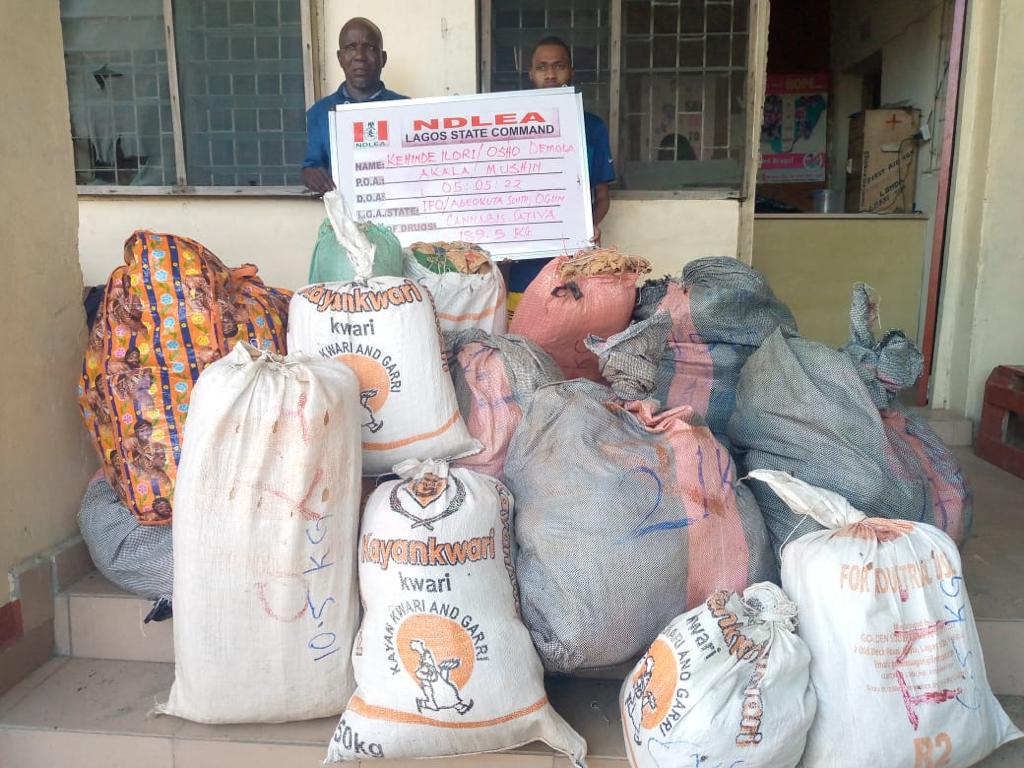 The second pregnant woman, Mrs. Gloria Asibor was arrested on Thursday 5th May while attempting to board a Turkish Airline flight to Bolonia, Spain via Istanbul, Turkey. A search of her luggage containing food items led to the discovery of 300 tablets of 200mg and 225mg high dosage Tramadol concealed in crayfish.
Meanwhile, large consignments of psychoactive substances have been intercepted in parts of Northwest, Northeast and North central. In Kaduna, a drug dealer, Obinna Anene a.k.a Young Alhaji was arrested on Friday 6th May at Buwaya Kaduna with 50,000 tablets of Diazepam weighing 9kg; 595 tablets of Tramadol weighing 318grams and 8 tablets of Co-codamol weighing 6grams.
Same day, a trafficker, Alhaji Modu Yahaya was caught with 26.5kg cannabis in Damaturu, Yobe state while travelling in a commercial vehicle from Abuja to Maiduguri, Borno state.

At least, nine drug dealers were arrested by operatives in Lagos on Thursday 5th May during raids in black spots in Mushin Olosha and Akala as well as Langbasa and Ikota in Ajah area of the state with different quantities of Cocaine, Heroin, Methamphetamine, Cannabis, and Skuchies. Those arrested include: Kehinde Ilori; Osho Demola Nurudeen; Kamarudeen Isiaka; Kazeem Ishola; Afeez Adebolade; Oguntana Aduragbemi; Chuks Alowai; Mrs. Bola Kazeem and Kehinde Ogunleye.
In Plateau, NDLEA operatives on Saturday 7th May intercepted a truck carrying 673.3kg cannabis along Bassa/Rukuba Barracks road in Jos while the driver and his assistant fled into the bush. In other parts of the state capital, two dealers; Manga Emmanuel and Yusuf Usman were arrested with 34 pinches of cocaine and 400grams of cannabis at old airport and Rikkos respectively.
Chairman/Chief Executive of NDLEA, Brig. Gen. Mohamed Buba Marwa (Retd) has commended the officers and men of the MMIA, Kaduna, Yobe, Lagos and Plateau Commands of the Agency for the arrests and seizures. He charged them and those in other commands across the country to sustain the heat on drug cartels as well as balance their drug supply reduction and drug demand reduction efforts.