By The Gazelle NewsJuly 28, 2021No Comments3 Mins Read 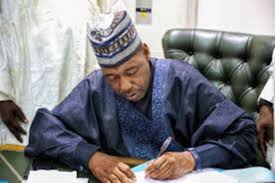 Share
Facebook Twitter LinkedIn Pinterest Email
Borno State Governor, Professor Babagana Zulum on Tuesday, 27 July, 2021 commissioned facilities in five renovated primary and secondary schools within the state capital Maiduguri and neighbouring Jere local government area of the state.
The facilities which were either newly built or renovated were carried out by the Borno State Education Trust Fund, created by the present administration.
According to a statement by the spokesman to the governor, Mallam Isa Gusau complete rehabilitation works were carried out to transform existing structures in the five schools, while new classrooms were constructed.
Gusau, while recalling  that more than 5000 school buildings were destroyed by Boko Haram in primary, secondary and tertiary schools in different parts of Borno since 2009,  according to a 2016 report co-authored by the World Bank, the European Union, Nigeria’s Federal Government and government of Adamawa, Bauchi, Borno, Gombe, Taraba and Yobe States which make up the northeast, where the insurgents have been operating, said Zulum has since 2019, constructed and rehabilitated dozens of mega size secondary schools, primary schools, which are being commissioned in phases.
He said the governor on Tuesday, 27 July, 202, commissioned schools located at Mashamari, Customs, Maimalari Barracks, Arabic Teachers College and Goni Damgari schools within Maiduguri and Jere Local Government.
He noted that the schools were renovated by Governor Zulum to meet educational needs of growing population in the state capital due to influx of internally displaced persons from more than 20 local government areas in the state.
Zulum said: “These projects which are made up of newly constructed classes and remodeled ones are all situated within the metropolis which is home to a large percentage of our IDPs, thereby, providing them with opportunities to ensure their wards attend schools. We believe that education remains the bedrock for the development of any society. It is for same reason that the bulk of this year’s budget was allocated to the education sector.”
The governor also announced the recruitment of 3,000 qualified teachers that will be deployed to various schools to boost education sector the end of the year.
He explained the the Trust Fund is providing instructional materials and equipment, academic staff training and development as well as facilitating research and publication in schools and educational institutions across Borno.
He said his government is determined to sustain aggressive drive on education and to maintain school facilities.
In her welcome address, chairperson of the Trust Fund, Professor Hauwa Biu expressed gratitude to the governor mfor giving her team opportunity to serve Borno. She assured of their sustained commitment towards enhancing the quality of education in the state.
Executive Secretary, Borno State Education Trust Fund, Maina Yaumi highlighted the activities of the board in the last one year. Which includes; the rehabilitation, development and consolidation of education at all levels in the state with emphasis on the provision and maintenance of essential physical infrastructure for teaching and learning