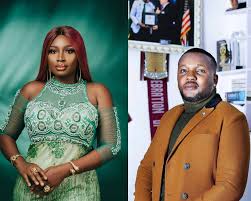 Posted By: The Gazelle NewsIn: Entertainment, Event Gallery, Metro, NewsNo Comments
Print Email
Popular Actress, Bimpe Oyebade has dragged her colleague, Yomi Fabiyi over his sexual advances in the industry.
Oyebade disclosed that Fabiyi almost frustrated her out of the industry with his threats and sexual harassment.
The actress made this known while reacting to Fabiyi’s controversial movie, Omo Iyabo, based on the ongoing sexual assault case involving colleague Baba Ijesha and comedian Princess.
While she expressed shock over the actor’s decision to release the movie, a follower reminded her of the time he kept on bullying her on social media.
She went on to narrate how the actor almost frustrated her out of the industry with his constant sexual advances and later threats.
“I’m aware, I just decided to always ignore. The major reason is because I didn’t make myself available for his sexual needs despite how much he tried but doing this to a child is just too much,” she replied.
Oyebade also accused the embattled actor of bullying her: “Yomi Fabiyi needs to be stopped. Enough is enough. Thank God for his grace, if not I would have given up on this dream because of his constant harassment, bully and threats.”
The embattled actor has received several backlashes from other celebrities and Nigerians over the release of the now controversial movie.
Fabiyi has been a strong advocate for Baba Ijesha who was has been embroiled in a rape scandal since April.
On May 14, he single-handedly led a peaceful protest in Lagos over Baba Ijesha’s continued detention.
He had earlier promised to make a movie from the Baba Ijesha saga.
He made good his promise to release a movie based on the rape allegation levelled against his embattled colleague and close friend, Omiyinka Olanrewaju (Baba Ijesha).
The movie, ‘Oko Iyabo’, which is loosely based on Baba Ijesha’s alleged rape saga, his ‘social media trial’ and all the parties involved, was released last Sunday, July 4.
The film, directed by Dele Matti, featured several Yoruba movie stars including Antar Laniyan, Lateef Adedimeji, Adewale Elesho and Lola Idije.

Man Who Is Addicted To Sex Dies, Spouse Charged For Murder