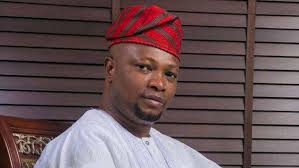 Posted By: The Gazelle NewsIn: News, PoliticsNo Comments
Print Email
The Lead Visioner of Lagos4Lagos Movement, Dr. Abdul-Azeez Olajide Adediran (Jandor) has greeted Lagosians on the celebration of a new year, noting that the historic year represents a watershed in the quest to free the state from the shackles of misgovernance and cluelessness by the APC-led government.
Jandor made the remarks during a broadcast to Lagosians to welcome the new year.
According to Jandor, 2022 is an all-important year in “our history as residents of Lagos”. He noted  that fate has kindly marked the year as the “eve of our autonomy from over two decades of private and self-seeking fiefdom”.
While empathizing with Lagos residents on their frustration and anger with the present APC-led government, he noted that the Lagos4Lagos Movement has been a forerunner in launching a campaign to free Lagos from despots. He therefore urged the people to use the year to start a process of reinforcing the cliché that power truly belongs to the people.
“For the past seven years, I have been privileged to champion the promotion of political liberation of Lagos and her residents through the Lagos4Lagos Movement.
He added: “The movement, peopled majorly by discerning young Lagos residents who are determined to fully exercise their true powers via the ballot come 2023, has become a strong voice for the populace, fated to force the institution of true democracy in Lagos”.
Speaking on the concerns raised in some quarters on his decision to join the PDP, the Lagos4Lagos arrowhead said: “Some have expressed genuine concerns about our move to the PDP; I do not take these views with levity, however, those who understand the nitty gritty of this game will agree that structure is vital to winning elections and a combination of our structure with that of PDP spells doom for Lagos APC in 2023”.
He added: “Lagos APC would have been jubilant if we had done something else aside the PDP, now they are restless and have resorted to incessant attacks on us since we made our intentions about the PDP known”
Berating the present Babajide Sanwoolu led administration for being clueless and bereft of ideas, Jandor noted that a passive voting populace threw up an unprepared individual as a Governor.
“The current lame approach to governance by the Babajide Sanwo-olu government is what we get when we stand back, in indifference and allow a paltry 11% of the voting population to elect our governor.”
He cited the response of the Governor to recent crisis to underscore the cluelessness of the government in showing empathy and addressing critical issues affecting residents of the state.
“The handling of the #Endsars protests, the aftermath JPI report, the one week of horror during which our underaged children met their untimely deaths at Dowen College, Badagry and Ojodu Grammar School, all without a single moment of silence that signals empathy and sensitivity on the part of the government are some of the tell-tale signs of a government that really didn’t evolve from the people”
He continued: “A more humane approach to any of these crises would have gone a long way to reassure Lagosians. For instance in the #Endsars JPI report, what I would have done differently would be not to argue on who truly called in the soldiers as the fact remains that soldiers were indeed at Lekki where I am the state chief security officer,  I won’t even bother to join in the debate of whether there was a massacre or not, especially for the fact that even the government’s pathologist confirmed one death in Lekki. That would have been treated as one death too many. The next thing to do would then be to take responsibility and apologize for all that went wrong under my watch”.
While urging Lagos residents to participate actively in the electoral process, Jandor enjoined everyone to use their PVC to demonstrate their electoral power.
“As we begin a brand-new year, I implore us all to utilize this election eve to get ourselves ready…get your PVC if you never had one; revalidate your PVC if you have moved location since the last election; convince at least one person to join this moving train. Ensure you make this year count again,” he said.

Meet Woman Who Flew To Nigeria To Confront Man Who Scammed Her Of N4.45m But Ended Up Becoming His Friend

From Malaria To #COVID-19, How I Survived, Survivor Of Coronavirus Infection Narrates His Story

Palliative Measures On  Nigerian Roads Are Paying Off – Fashola