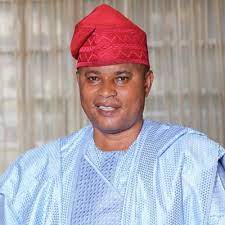 Posted By: The Gazelle NewsIn: NewsNo Comments
Print Email
Ahead of the 2023 election, the Deputy Speaker of the Lagos House of Assembly, Wasiu Eshinlokun-Sanni, has appealed to Nigerians especially Lagosians to obtain their Permanent Voter Cards (PVC) and vote, saying the over 20 million uncollected PVCs could affect the choice of leaders and representatives that would be elected during next year’s poll.
Eshinlokun-Sanni noted that the imperative of voter cards was hinged on the need to ensure that every Nigerian that had attained the age of 18 and was eligible to vote could exercise their civic responsibility.
The Deputy Speaker said that when the people refused to collect their PVCs, they cannot effectively determine who become their leaders and representative during elections particularly the 2023 poll.
He made the appeal on Thursday, 30 June, 2022 at the 8th Annual Constituency Stakeholders’ Meeting, themed: 2023 General Election: The Imperative of Permanent Voters’ Card (PVC) held at the Bola Tinubu multi-purpose centre in Lagos Island axis of the state.
The lawmaker stressed that it was worrisome that these huge number of PVCs were yet to be collected across the nation with over one million from Lagos, an indication that these Nigerians that should exercise their duties may not be able to do so during the election if they did not collect their voter cards.
According to him, this situation does not augur well for our progress, our democracy, and the development of the state as it may create an opportunity for incompetent persons to be elected as our leaders and representatives and thus overturn our achievements.
“Your PVC is your power not just to continue building the state but the nation as well; it is your power for continuity, it is your power for the stability and sustainability of our enduring and cherished democracy. It is your power to secure a bright and promising future for our children, our state, and the nation.
Earlier, a party leader for Lagos Island and former Commissioner for Home Affairs in the state, Oyinlomo Danmole, urged residents at the meeting to embark on sensitization exercise, educating their neighbours who were yet to register and collect their PVCs to do so.
Danmole assured Nigerians that the Independent National Electoral Commission (INEC) would ensure that all votes count during next year’s election across the country.
He said: “We all should understand that our vote will count, so let us visit INEC offices in our local governments and collect our PVCs in readiness for the 2023 general election in Lagos.
Meanwhile, the Chairman of the Lagos State Universal Basic Education Board (SUBEB), Wahab Alawiye-King, charged INEC to look into bottlenecks that could have made some Nigerians shun the collection of their PVCs.
Alawiye-King suggested that the registration and collection processes could be reviewed and made attractive for everyone across the country to approach INEC and collect their voter cards.

Nigerian Orphan Who Visits Orphanage To Cut Hair For Kids Free; I Want To Show That Skills Can Also Be Used To Touch Lives, He Says + Photos