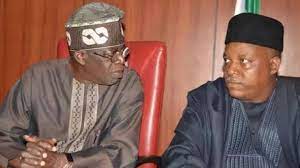 2023: Tinubu, Shettima On The Trail Of History

Posted By: The Gazelle NewsIn: News, OpinionNo Comments
Print Email
By: James Bwala
Tinubu is phenomenal and Kashim Shettima is fiercely loyal as Festus Keyamo, SAN expresses in his tweet. Their emergence as candidates for the All Progressive Party, APC, for the 2023 general  elections did not come as a surprise for those who may have been following the trend of events since the window was open for the next round of elections in Nigeria. In November, 2021, I gave a breakdown of how this emergence is going to happen in my analysis with the caption: “2023: How Kashim Shettima May Become Nigeria’s Next Vice President”. This was informed by my careful investigation of the politics in the APC and not prophetic because I deal with facts and not assumptions.
The declaration by Bola Ahmed Tinubu today, made everything easy for the party and Nigerians who are waiting rather anxiously for the mentioning of Tinubu’s running mate with hearts beating and temperature high with expectations. I tried to study the political history of Nigeria and I was basing my permutation on the fact that history always repeats itself. The emergence of MKO Abiola and Babagana Kingibe under the platform of the Social Democratic Party was a compass to my objectives.
Although their emergence was short-lived it came with a lot of promises for Nigeria and Nigerians as it presented a united Nigeria for all the geopolitical zones. The Igbos, the Hausas and the Yorubas have all agreed on that election. I was the Nigeria we want and still recall how it would have been.  With such dreams of hope, the days gone by and years followed. History has come again with Tinubu and Kashim Shettima at the centre of it.
This new dawn of history is also coming with the good tidings for those who wish Nigeria well and have continued to pray for God to us leaders with the hearts of gold that will shape this country and put it on the path of economic growth. The works of Asiwaju Bola Ahmed Tinubu as Lagos state governor between 1999 and 2007 as well as Kashim Shettima who served Borno state from 2011 and 2018 speaks for the records as part of their testaments in power, that is why Nigerians are not afraid to give them the support needed to change the story about Nigeria.
Despite the grandiloquence of those preaching obedience and the rhetoric of the Atiku-lated, Nigerians across geopolitical zones will shock those in the temple of the psychoanalysts because facts and figures which they wanted to see will be presented before them to see, feel and touch. Tinubu and Shettima are not coming from a world apart as they have known themselves well to be able to read each other’s lips as such there will be no space for learning to understand each other about taking decisions for the good of Nigeria.
For Tinubu and Shettima on this path to power, everything was turning around in their favour as the duo would soon control the political firmament in the power block. The Presidency under Tinubu and Shettima will be very powerful; however, they will be the best and will drive their strength on each other’s shoulders. Together they make a solid force and an impenetrable wall against any political water, wind or storm. With good planning and knowledge acquired about leadership, Asiwaju Bola Ahmed Tinubu and Kashim Shettima are making every effort to make a difference about how to build reputation and make relationships work for a new Nigeria.
The move by politicians within and across party lines to establish a hold on the political ground around Tinubu and Shettima has since begun and is trying to get the nod to hold the piece of area to be controlled in the next few days. 2023 may perhaps be built around Kashim Shettima as the master of the game at the moment while the teacher looks with admiration. As a good student, Kashim Shettima learnt so much from Tinubu that his idea of moving with the giants in fashioning a new ground in Nigeria’s political history puts him on the political map for history to reckon with when books will be opened to read stories about those who makes the Nigeria’s 2023 general elections a historic move that may perhaps change the way we understand democracy from the experience in 1999.

After 27 Years Of Marriage, Bill Gates Set To Divorce His Wife, Melinda