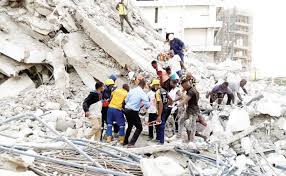 Posted By: The Gazelle NewsIn: News, OpinionNo Comments
Print Email
By Bode ‘Gbore
A lying mind, may not notice the tears on the faces of those who mourn, or would it care about the turns from gladness to sadness of people who desire laughter and stability.
While several families mourn the loss of their loved ones in the collapsed Ikoyi 21 storey building, and some real estate investors mourn the loss of their funds, and the next door neighbour mourn the peace they once had, away from clearing tractors and rescue Teams. No o, what a lying mind sees is nothing but a twist of facts, a perversion of truths and an orchestration of confusion.
This collapse, is four days ago, but we already have conclusions from the minds that are not fit for a sane environment. Meanwhile, we may need about seven more days for total evacuation to complete.
So soon, some people who know nothing about building of houses, especially a highrise, have concluded on the Social Media Panel of Enquiries, on what brought the house down, who caused it, the Owner of the land and those who have invested or who is fronting for who.
Then appears the name of Mr. Credibility, who has uncommon integrity that, I must confess, we are learning from.
Those who know him, will stand up and tell you one thing that is certain, you can’t run illegalities around Yemi Osinbajo. You just have to do the right things, in the right way! All other options, are closed!
If you commit a crime around him, you will spend your time!
The ownership of an Estate Developer is not secret. It is written on the list at the Corporate Affairs Commission.
Once, I read the name of Micheal Ade Ojo of Elizade Motors, who has since made a statement, denouncing his investment or involvement with the house, the Developer, or a sale of any land to Yemi Osinbajo.
Yemi Osinbajo himself, has made his investments open on the list of his assets, as declared. (I was there, in person as Yemi Osinbajo attended the Send off Events, from each of his business involvements, from Bank to Chamber before his swearing in as Vice President in 2015)
The late Femi, is said to have built highrises in UK, USA, SA, and now Nigeria!
In those other environments, there has never been a mistake of who owns the houses. But in Nigeria, he is tainted with the allegation of fronting for high profile Politicians. He didn’t front for Trump, not for May and not for Mandela. So, the Internet rats, can’t mention the name of the Nigerian Vice President at those places.
So, why are we on this part of the world with fabricators of lies and confusionists? What is the aim of tainting the personality of a person who serves his land with such passion?
Must we go on, with the abuse and misuse of the technology of the Social Media, which was the innovation that makes our lives better.
While we all find lessons to learn at these tensive moments, some learn nothing for themselves but, life going on, is falsehood going on. Why, because lying is living, for evil minds.
Freedom of expression, has its own dark sides, but only to a mind that feels enslaved.
21 stories of lies, told of a 21 storey building crash, will not turn lies to truth.
It is time for each Nigerian Reader to use their own eyes to read, mind to think and mouth to confess what the mind rightly concludes.
It is obvious, actually, that those who fabricate lies on Social Media, have an idea of the average Nigerian, as someone who will not read to think, but read to talk.
You’ll be such a wonder, if you would just live life as an Enquirer. Ask questions!
I’d love to see a Nigeria, where her people are conscious of legal implications when a lie is told.
It is a sober time for us all, as we mourn the souls that have been lost. This is right and proper.
May the lives of the departed, find rest. May their families, find comfort.
Bode ‘Gbore lives in Abuja, Nigeria.
Nov 5th, 2021

Femi Abbas On Friday: Lest We Forget