By The Gazelle NewsDecember 21, 2022No Comments3 Mins Read 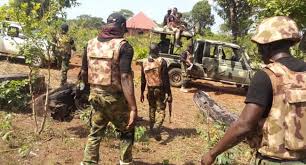 No fewer than 213 bodies, comprising that of terrorists and their collaborators have been recovered days after intense exchanges of gunfire between Nigerian troops and terrorists in some Zamfara communities, PRNigeria gathered

The military also lost 10 personnel while some civilians were killed when bandits fled toward the communities.

This is just as PRNigeria yesterday reported that the air component and ground troops of Operation Hadarin Daji recorded a major victory after eliminating terrorists in Malele Village of Dansadau Local Government Area of Zamfara State.

Aircraft from the Nigerian Air Force (NAF) and ground troops of the Nigerian Army, sustained a well-coordinated joint operation since last Saturday, 17 December, 2022.

Terrorist activities in the area have been exacerbated due to the lingering crisis between Hausas and Fulanis over the devouring of farm produce thereby making the area very volatile, especially in Malele, Maigoge, Yan Sawayu, Ruwan Tofa, Mai Awaki, and Zama Lafiya, all under Mutunji District of Dansadau Emirate Council.

A defence intelligence operative had told PRNigeria how the security services mobilized their troops in launching a series of attacks and airstrikes against those warring bandits coming from different parts of the country.

“Both the Nigerian Army and Nigerian Air Force (NAF) operations are yielding fantastic results in the area with several terrorists being eliminated as the battle is still on.

“Bandits who were fleeing from NAF airstrikes ran into a small village called Mutunji to take refuge. After ensuring that civilian lives in the village were not at risk, the NAF aircraft undertook a precision strike at the exact location while the ground troops cleared the fleeing bandits in their escape bids,” the operative had said.

But in an update on Tuesday, 20 December, 2022, credible sources in the community told PRNigeria that 10 soldiers paid the supreme price while their colleagues, pounded the terrorists.

“At least we counted 213 bodies of the bandit terrorists and their collaborators. Some civilians too were killed in what the military called ‘collateral damage’ when fleeing bandits hid in the communities.

“The attack on troops occurred when the troops with the support of local vigilantes were  navigating the terrains for counter-attacks,” the military source explained.

In his condolence message, Governor Bello Matawalle, through Zailani Bappa, his Special Adviser on Public Enlightenment, Media and Communications, expressed his heartfelt sympathy to the families of victims earlier caught in military fire against the marauding bandits.

“I wish to, on behalf of myself, my family, the state Government and the entire good people of Zamfara state, extend my sincere sympathy to those who were injured and the families of those who died as a result of this collateral damage,” the Governor said.