By The Gazelle NewsNovember 15, 2022No Comments2 Mins Read 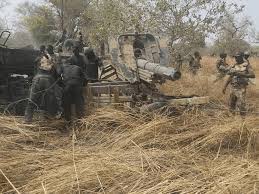 Community vigilantes and youths have arrested suspected terrorists and handed them to security authorities in Niger State.

PRNigeria gathered the suspected terrorists were arrested during a search and interrogation of strange people in Wawa district of New Bussa.

A source who participated in the search in an audio sent to PRNigeria disclosed that the suspects confessed on their mission in the community.

The source said: “We thank God for the efforts of the military in our area. As part of our security consciousness, after recent attempt on a military base in Wawa, we searched for strangers in our community and we were able to arrest eight of them with criminal intent and recovered AK-47 guns, 10 Magazines, and 160 bullets, among other lethal ammunitions.

“Surprisingly, some of the suspects even prayed the early-morning Muslim prayer with us in a Mosque. Nobody would have thought that they are criminals, as they looked very religious and pious and they are not even Fulanis,” he said.

During the counter-attack, the military killed scores of terrorists and arrested one of their commanders after a failed attempt to free their leaders held in a security facility located in the axis.