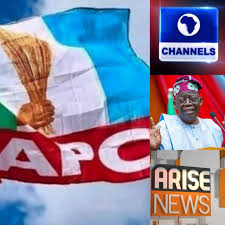 Posted By: The Gazelle NewsIn: Multimedia, News, PoliticsNo Comments
Print Email
The Presidential Campaign Council of the All Progressives Congress (APC) has petitioned the National Broadcasting Commission, asking for sanctions against Arise News and Channels TV over their fake reports on the APC Presidential Candidate, Asiwaju Bola Ahmed Tinubu.
In a petition signed by the Special Adviser, Media, Communications and Public Affairs of the PCC, Mr. Dele Alake, which was addressed to the Director-General, Balarabe Shehu Ilelah both television stations were accused of breaching broadcast codes with their actions.
According the Alake, the purported indictment against Asiwaju Tinubu as reported and discussed on Arise News and Channels TV had already been cleared in a correspondence between then Inspector General of Police Tafa Balogun and the US government.
The PCC said continued broadcast of a non-existing ‘indictment’ violated the NBC code.
“The case in question, which did not indict our candidate, has since been overtaken by events after interrogation and correspondences between then Inspector General of Police Tafa Balogun in 2003 and the United States government. The US Justice Department in a letter dated 4th February, 2003, issued by the Lagos Consulate of the United States Embassy cleared our candidate. The letter was signed by Michael Bonner, the Consulate’s legal attache.
“The Campaign Council was therefore surprised that certain media houses, such as ARISE News and Channels TV among others, went ahead to transmit and broadcast issues purportedly indicting our candidate in violation of section 3,3 I of the Code which says that:
“The Broadcaster shall
(a) Ensure that any information given in a programme in whatever form is accurate’,
“We believe that the operators of the stations, by their professional standing, should have access to research platforms to verify information before dishing it to the public,” the petition read.
It further accused both stations of using the already cleared document in their interviews of Festus Keyamo SAN and spokesman of the opposition PDP respectively.
Both stations, the petition said, went further to broadcast a fake letter in circulation, purportedly issued by the Independent National Electoral Commission, stating that the electoral body was investigating Tinubu.
This was also against the NBC code, which forbids broadcasting fake news in the words of Mr. Alake.
“Notwithstanding the broadcast of the falsehood peddled by opposition elements, ARISE TV and Channels TV went ahead to transmit and circulate a fake letter insinuating that the Independent National Electoral Commission has initiated an investigation of the APC Presidential candidate premised on the fake letter in circulation.
“Section 5.1.2 states that ‘The Broadcaster shall present news as factual and in correct and fair manner without (a) Distortion, Exaggerations or Misrepresentation.
“Section 5.1.3 further states that ‘Fake News is prohibited’.
“The fake INEC letter has been proven to be fake and this breach is tantamount to disinformation.”
The APC Presidential Campaign Council listed other infractions against Arise TV which has been known to carry fake reports against Asiwaju Tinubu.
“Arise TV has admitted guilt to this in a broadcast few days ago. We make bold to say that in 2014 the AIT transmitted a TV documentary “The Lion of Bourdillon” to which the NBC sanctioned it and it apologized to the victim.
“However, only last week Chief Bode George, a chieftain of the PDP in an interview on Arise TV referred to materials from the documentary to vilify our Presidential candidate in breach of the Code and the apology granted the victim.
“These breaches attract a sanction of Class B and we implore the National Broadcasting Commission to invoke the aforementioned sections to penalize ARISE TV and Channels TV for breach of the Broadcast code. Section 5.3.3 of the code states that “The Broadcaster shall (b) in using Political materials for News and current Affairs Programmes avoid hate speech, inflammatory, Derogatory and Divisive remarks or Allusions’.”
The party said the events “vilified and denigrated” Asiwaju Tinubu as an indicted offender and law breaker in the US”.
As a matter of seeking justice for the APC presidential candidate, the PCC is asking the NBC to invoke the appropriate sanctions against the offending television stations.
“Our Presidential candidate was vilified and denigrated as an indicted offender and law breaker in the US court case by ARISE TV and Channels TV during their broadcasts in the last week, such as The Morning Show and Politics Today respectively.
“Section 3.1.2 of the Nigeria Broadcasting Code also states that-
‘The Broadcaster shall not transmit any programme, programme promotion, community service announcement or station identity which is likely in any circumstance to provoke or perpetuate in a reasonable person intense dislike, serious contempt or severe ridicule against a person or groups of people..
“For the effect of reference of powers to sanction erring broadcasters, The Code states in Chapter One, Section 1.1 (h) ‘The Power to establish and disseminate the code is derived from the provisions of Section 2 (1) (h) of the NBC Act, which is its enabling law.
“We hereby request the National Broadcasting Commission to sanction the offending Stations in the name of justice and in protection of the rights of our candidate as well as avoidance of future reoccurrence,” Alake said in the petition.

Love! I Was 25, He Was 22, Couldn’t Even Afford To Take Me, Ondo First Lady Narrates Romance Story With Hubby