By The Gazelle NewsJanuary 7, 2022No Comments4 Mins Read 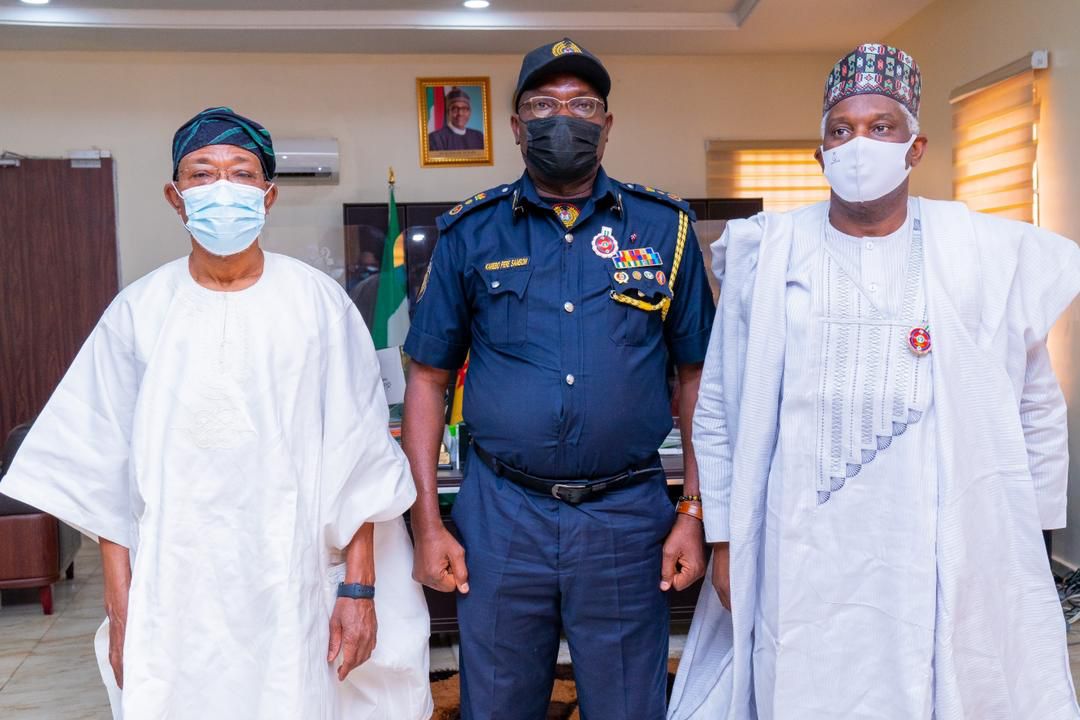 Share
Facebook Twitter LinkedIn Pinterest Email
The Minister of Interior, Ogbeni Rauf Aregbesola has charged the newly appointed Acting Controller General of the Federal Fire Service, Deputy Controller General (DCG) Karebo Peremobowei Samson, to embark on enlightenment and engagement of the public on preventive measures on curbing fire outbreak.
Ogbeni Aregbesola gave this advice during the presentation of the acting CG to him in his office at the Ministry’s headquarters in Abuja on Thursday, 6 January, 2022.
DCG Samson, who is the most senior officer in the agency, was directed to take over the affairs of the Service pending the appointment of a substantive Controller General by President Muhammadu Buhari.
The Minister admonished him to develop the capacity to ensure large buildings that house a lot of humans have safety equipment such as fire alarms and fire fighters personnel and establish more fire stations across the country.
Ogbeni Aregbesola added that outside the Police, the oldest paramilitary service is the Federal Fire Service (FFS) which emerged as a unit in 1904. He stated further that a lot of human capacity, Hi-Tech equipment, trainings, hardware and huge budgets have been made available to the FFS since its inception and especially during President Buhari’s regime.
Ogbeni Aregbesola stressed on three cardinal focal areas the new Acting CGF should concentrate efforts on. These are: massive public enlightenment campaign on incidents that could lead to fire outbreak. This, Aregbesola said, should begin from the curriculum of the elementary schools where children are exposed early to needed awareness and that this basic awareness creation should run from the elementary school curriculum to even the university level.
“This will definitely go a long way in providing the necessary training, preparedness, prevention and protection of our environment. This should be one of the major concerns of the Acting CGF”, the Minister said.
The second charge was for the Federal Fire Service to develop a robust capacity to make all buildings with huge number of human beings to, as a matter of necessity, have both firefighting and protection equipment.
Thirdly, the Minister advocated for collaboration and the creation of synergy between the FFS and the Nigeria Air Force, who owns aircrafts, to assist the Fire Service on aerial firefighting capacity, by attacking large fire from the air through aerial deployment of large buckets of chemicals to bomb raging fire from the air. This would have raised the capacity of the Service to tackle the fire incidents at Next Cash and Carry shop in Abuja and the very recent one that occurred at the Yaba plank market in Lagos.
Speaking further, the Minister said the Ag. CGF, Mr Karebo Peremobowei Samson’s performance shall be measured by these three priority areas, and that the response time too should be reduced to seven minutes possibly.
The Minister confirmed that the administration of President Muhammadu Buhari has invested huge funds in the purchase of equipment and capacity building of personnel, and so they cannot afford to fail but must deliver on their responsibility.
Ogbeni Aregbesola commended the FFS as the smartest uniformed public service within the Interior Ministry and that they hold the best public appearance generally.
Earlier, the Permanent Secretary of the Interior Ministry, Dr Shuaib Belgore, said the new Ag. CGF, Karebo Peremobowei Samson, is an outstanding officer who is knowledgeable in the business of fire service and rescue missions from the grassroots and that the Ministry’s choice in picking him is the right one, seeing he is a capable officer who shall steer the activities of the FFS with great success.
The Commissioner of Civil Defence, Corrections, Fire and Immigration Services Board (CDCFIB) for Appointment and Discipline, Maj. Gen. E. Bassey (Rtd), who officially presented the acting CG to the Minister, said that this became necessary following the expiration of the former CGF, Alhaji Liman Ibrahim, who handed over to the most senior officer on Thursday, 30 December, 2021.
The Acting CG FFS in his response assured the Minister that he and his team would make determined efforts to devise better methods of attacking fire incidents.
He promised that he will look into training and welfare of staff and also run an all-inclusive management team.
The Secretary/ Director of CDCFIB, Aisha Ahmed Rufai, the CG of the NSCDC, Abubakar Ahmed Audi, and other Directors of the Ministry were present at the colourful event.