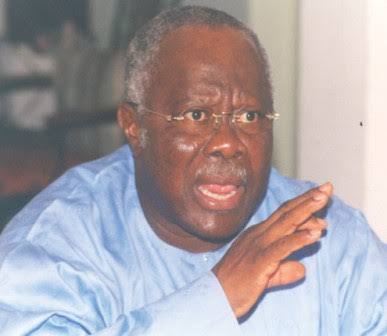 Bode George, A Jester In Politics: APC Scribe, Spokesman Respond To His Claim To Retire Tinubu, Read Their Unedited Statements

Posted By: The Gazelle NewsIn:
Print Email
Chief Bode George is a good political entertainer who fits the comedy genre in a theatre studio.
It is always interesting how people forget history. He, Chief George is obviously not a deep thinker when it comes reminiscencing over past roles, attainments and experiences, otherwise he would know that he has no credibility.
What are the man’s attractive sell-points and credentials? What legacy did he leave behind as a former military governor and as Chairman Nigerian Ports Authority ? What stride has he made in Lagos PDP since 1999 till date and how well is he loved even within his own cleavage?
Bola Tinubu seems to be George’s greatest nightmare and political headache which analgesic he has kept searching for.
At a time in the past he was quoted as having said Tinubu influenced his going to jail for proven corruption case against him. Recently, he says he will relocate to Togo should Tinubu emerge as Nigeria’s President. Now, the jester,  in his usual comic display says he is running for President to retire Tinubu should he come out to run for President, a case of the warthog charging at the lion.
Maybe he doesn’t ponder to see that he has been the greatest source of PDP’s misfortune in the entire Southwest Nigeria.
Past election records are there to show that Chief Bode George has no political value. Now, see who wants to retire the man who led the hithertho opposition to dismantle PDP from the National and to chase them out of Aso rock.
Chief George, a political weakling and feather weight has persistently chased the shadows for over 20 years in the futile efforts to ‘capture Lagos’.
In all his foray within PDP so far, he has been a rabble-rouser. If he was not fighting Agbaje, he would be fighting Obanikoro, Doherty or Salvador. Is this the one who wants to launch himself into Presidency ?
More than anyone else within their Lagos fold he has created so much disarray and division and opposition to his presidential bid will start from his own backyard.
At best, George’s comments should just be taken as one of those laughable political statements filling the air waves to keep this period busy as it is not worth any attention.
As we move on, time will tell.
LANRE OGUNYEMI,
SECRETARY, APC, LAGOS.
Bode George’s Nollywood Ambition
Our attention has been drawn to the purported presidential ambition of Chief Bode George through series of newspaper interviews.
The dreamy nollywood ambition itself would ordinarily not have been dignified with a response but for his focus on his political nemesis, Asiwaju Bola Ahmed Tinubu.
It’s apparent from the various interviews that Chief Bode George has a phobia for Asiwaju who he solely holds responsibile for his consistent political failures since the advent of democracy in Nigeria.
In his recent interview, he attributed his constant defeat in Lagos state to rigging. It was convenient for him to forget that he has not been able to hold Lagos state
PDP together with all his assumed experience. His party often times makes the headlines for violent crisis like rudderless sheep. The fact that PDP in Lagos state only comes alive few months to national elections is only suggestive of political yahoo yahoo.
Our candid advice is that Chief George should first provide leadership in his homestead before venturing beyond. His inability to deliver his polling units during elections speaks volumes about his electoral value. His major selling point of having become a state governor at 42 years and the not so glorious stint at NPA should best be confined to the dustbin of history. A word is enough for the wise. Perhaps the age of Methuselah has nothing to do with the wisdom of Solomon.
Seye Oladejo
Lagos state APC spokesman