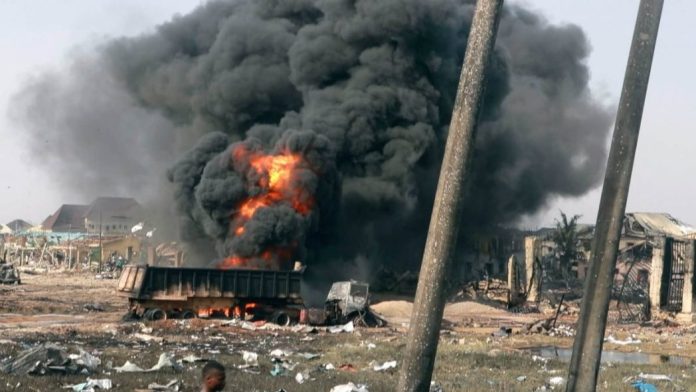 Details Of How Gas Explosion Hit Lagos On Christmas Eve

Posted By: The Gazelle NewsIn: NewsNo Comments
Print Email
A gas pipeline has exploded at the Ayobo Ipaja area of Lagos State, sending residents scampering for safety.
The explosion occurred around 1 am on Friday, 24 December, 2021 Christmas Eve. It could not be immediately confirmed if there were casualties.
Residents have been sharing photos and videos of the raging fire on social media.
Chairman of Ayobo-Ipaja Local Council Development, Bola Shobowale confirmed the development to PUNCH.
“It is true. It happened around 1 am,” she said.
The Gazelle News.com learnt that the pipeline fire actually occurred at Isale Odo, LASU Road, Isheri Olofin.
It was caused by an electric cable which collapse led to electric sparks all over the area and the sparks got to the spilled content of PMS around the area which led to the pipeline gutting fire and subsequent explosion.
The pipeline corridor have been known to have  spillage often due to activities of vandals