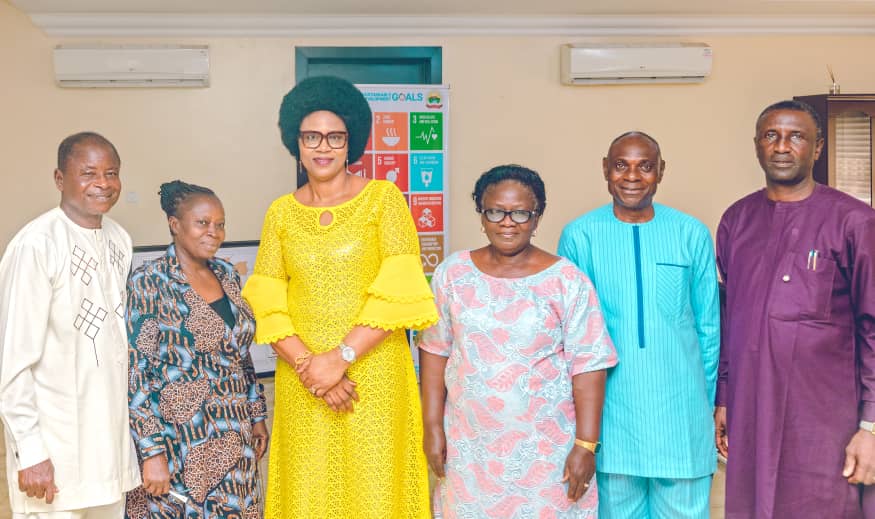 Posted By: The Gazelle NewsIn: News, PoliticsNo Comments
Print Email
The Wife of Ekiti State Governor, Dr Olayemi Oyebanji, has reiterated the state Government’s commitment to lifting the standard of education in the State.
Dr Oyebanji gave the assurance when she received some of her old colleagues and lecturers from the Ekiti State University, in Ado-Ekiti on Wednesday, 2 November, 2022.
The First Lady who described her new position as a call to serve said it was the Lord’s doing and noted that she will not take it for granted.
The First Lady recalled her days at the Ekiti State University and her challenges when she moved to the University of Ibadan, describing the experience as one of the best decisions she had made.
She appreciated the team for their solidarity and enjoined them to always remember the Governor, Mr Biodun Oyebanji and his team in their prayers.
In her remarks, Prof Yemi Adedokun who led the team of Professors to the office of the First Lady, noted that the purpose of the visit was to solidarise with First Lady  for her husband’s victory at the poll and inauguration as Governor of the state.
She further pledged the support of the team for the present administration and charged the Governor’s Wife not to derail from the good character she was known for.
The Body of Professors reminisced on their days in EkSU and thanked God for lifting one of their own to the position of First Lady and prayed that God would continue to keep her and her husband and guide them through for a successful tenure.

2023: I Seek Political Office Strictly On Prompting Of My Leaders – Aregbesola