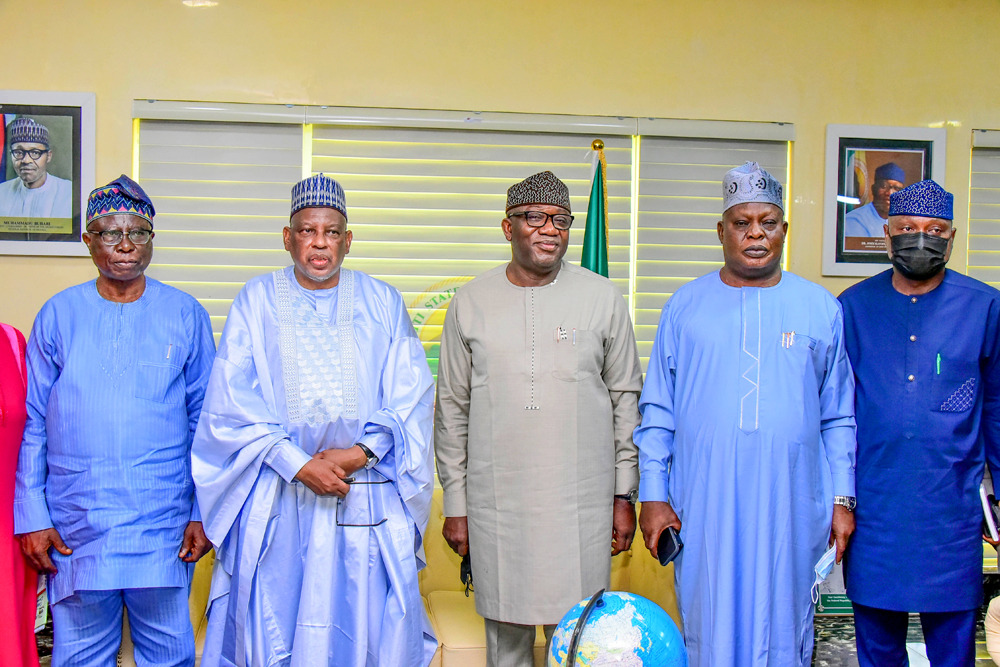 Posted By: The Gazelle NewsIn: Education, NewsNo Comments
Print Email
Ekiti State Governor, Dr Kayode Fayemi, has disclosed that his administration had spent N16 billion to develop basic education in the state by building new schools, renovating others and building capacity of teachers.
Dr Fayemi, who stated this in Ado-Ekiti on Tuesday, 9 November, 2021 while receiving a delegation from Universal Basic Education Commission (UBEC) led by its Executive Secretary, Dr Hamid Bobboyi, also affirmed that the state had recorded 40,000 and 25,000 increase in Primary and Secondary schools enrolment within the first two and a half years of his administration.
The Governor, who commended the Executive Secretary for the great job the Commission was doing, described him as an exemplar who has painstakingly delivered on the assignment given to him making use of critical initiative.
Dr Fayemi also said that his administration had to pay N8 billion to enable it access N16 billion, stressing that the intervention has been very helpful to the state in its giant strides in the area of  basic education development.
Noting that a neglect in basic education development by the immediate past administration led to the State moving from the first position it occupied in 2014 to the last position when he came back in 2018, Dr Fayemi however said he was happy seeing that the State has bounced back to its enviable position in the Southwest and the entire country within a period of two and a half years that he returned to office.
He said government would continue to make schools easily accessible to all Ekiti children no matter where they live to enable them get to their school covering short distance in line with the provision of UNESCO.
The Governor further reiterated the commitment of his administration to the development of e-learning at every level of education in the state, adding that he had a shot at it during his first term in office where he had an agreement with Samsung for the provision of a Solar laptop per child in the junior secondary schools.
“I remember visiting the Executive Secretary in my first month in office, when I returned in 2018, and UBEC had just completed a study at the time on enrolment and performance, and Ekiti that was the first when I left in 2014 was the last in the entire Southwest. And I think in two and a half years, we have had a 40,000 increase in our Primary School enrolment and 25,000 in Secondary School enrolment.
“I know that e-learning is a major interest and we are one of the beneficiaries of those schools. I think its almost completed now. We’ve always been passionate about e-learning, during my first term, I know that one of the projects that we focused on, was to make available solar laptop per child in our Junior Secondary Schools which of course had programme, curriculum loaded into them and Samsung also then donated a Samsung Engineering Centre for the repair of gadgets in our Technical College here in Ado-Ekiti
“Once you can tackle literacy and numeracy, that is the core of education, it’s not tertiary education. For someone to be able to live a life of worth, you don’t have to have a University degree, if you are properly trained in basic education level, and that is an area that we have concentrated. He stated.
Earlier, the UBEC Executive Secretary, Dr Hamid Bobboyi commended the sincerity of Dr Fayemi and his administration for the huge investment in education saying the state never lagged behind in payment of counterpart funding during his administration.
The UBEC boss urged state governments to embrace e-learning in order to change the narratives of ensuring that everyone leverages on information and communication technology adding that UBEC would continue to assist states to reposition their basic education development.
Also at the event were the Deputy Governor, Otunba Bisi Egbeyemi; Secretary to the State Government, Mr Biodun Oyebanji; the state Commissioner for Education, Science and Technology, Dr Bimpe Aderiye; and Chairman, Ekiti SUBEB, Prof. Femi Akinwumi.